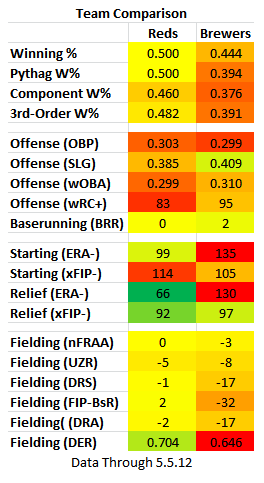 The Reds head to Milwaukee to take on the Brewers today. Thus far, the Brewers seem a pale imitation of the team that won 96 games and took the NL Central crown last season. Offensively, they've shown good power, but poor on base skills that collectively amounts to a roughly average hitting team (for a NL squad). They've undoubtedly missed Prince Fielder, and furthermore have been further decimated by injuries to 2 (arguably three) of their starters.

On the mound, both the starters and relievers have put up far better peripherals than their actual results. Part of that may be luck, but part of it probably has to do with this team's fielding. Every metric we have rates them as somewhere between bad and atrocious with the glove. They are currently last in DER, last in FIP-BsR, and in the bottom half in most other measures.

I think the Brewers are probably better than they've shown thus far, despite the fact that their Pythagorean (and other) records are so bad. They still have some good pieces on offense, and their pitching is better than it has shown. But how much better? At this point, it's hard to view them as anything better than a .500 team.

As far as the Reds go, it's been a bit of a struggle thus far for the offense. Though improved of late, they've been slow to both get on base and show much power. Even their fielding has been rated as little more than average by several measures. The highlight has been the pitching, both in the rotation and in the pen. Unfortunately, the starting pitching looks to have gotten a tad lucky thus far based on their xFIP...hopefully we'll see better peripherals moving forward to keep their ERA down.

Not really a hitters' park...but a good place to slug home runs, especially if you're a lefty. 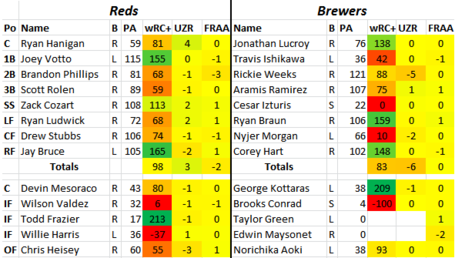 The Reds' offense to date has essentially been Bruce, Votto, and Zack Cozart. Everyone else has been pretty lousy...though you can see Hanigan is already racking up outstanding fielding numbers. I'm sure that Phillips will eventually turn it around. I'm not positive about the others, though I want to believe. My biggest worry is Scott Rolen. Todd Frazier sure is acting like he's ready to share that job--as I write this I'm watching a replay of Sunday's game.

The Brewers have similar issues. They're getting great performances from Ryan Braun, Corey Hart, and Jonathan Lucroy. But everyone else has been below average. On top of this, they've lost Mat Gamel (the former ballyhooed prospect and should-have-been Prince Fielder replacement) for the season, as well as Alex Gonzalez and Carlos Gomez to the 15-day DL.

25-year old Taylor Green was promoted to fill Alex Gonzalez's roster spot. Green is the #8 prospect in the Brewers' system according to Baseball America, and the #5 by Kevin Goldstein at Baseball Prospectus. After repeating AA in 2010, he put together a fantastic 2011 season, posting a .336/.413/.583 line in 487 AB's in AAA. That said, his reputation in prospect circles seems to be that of a guy who has a limited ceiling. He started Sunday at 1B, and he seems to me like the obvious person to take over there with Gamel out for the season. I haven't seen any reports that he will, in fact, do this.

It's pretty exciting to see Bronson Arroyo sporting SIERAs and xFIPs in the low-4's again. He's doing it largely with an other-worldly low walk-rate of 0.8, however. Hopefully he can keep it up, because they certainly could use an effective Arroyo this and next year. ... Also, why the heck isn't Homer Bailey striking guys out?

On to the Brew Crew....Gallardo is walking too many guys thus far, and Greinke is again posting better peripherals than performance. But the guy on the Brewers that really intrigues me is Marco Estrada. Some of his line stems from relief, but he's started two games this year since Chris Narveson went down with his injury and posted an 11/2 K/BB ratio in 11 innings. Last year, when again filling in as a starter, he posted a 33/10 K/BB ratio in 41.3 innings. The Brewers seem skeptical about him as a starter, as they keep skipping him whenever they get a chance...but my feeling is that he can probably be a pretty decent back of the rotation starter. 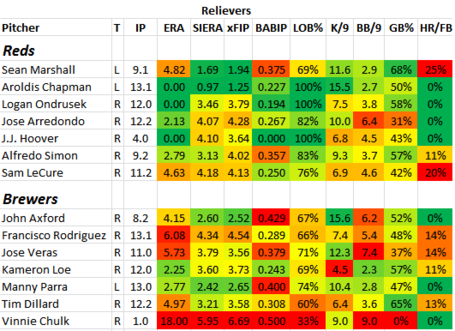 Man, the Reds' pen has been lights out this year. Marshall's ERA isn't pretty, but his numbers are just as other-wordly has they've been in recent years. He's exciting. Speaking of exciting, holy crap Arolis Chapman.

Evaluating bullpens is always an exercise in small sample size madness. But I do enjoy John Axford's line. Nearly 16 k/9, but also 6+ bb/9? It looks like vintage Carlos Marmol. K-Rod nominally still is a setup guy, but I have to think that won't last very long given his performance. The only lefty in their pen is a good one: Manny Parra. He's bounced between relief and the rotation in recent years, but has been terrific out of their pen this year.