You know it's a good day for the Reds when I have to get extremely nit-picky to pick the JNMHSotG, and that's exactly what I had to do to pick Drew Stubbs over Mat Latos. While both were awesometallbaseballplayersinRedshats today, Latos did only manage to make it through 6 innings. Drew Stubbs, on the other hand, may well have had the second best game of his Reds career (aside from his 3 HR game at Wrigley in 2010). Stubby was 3 for 4 with a 2-run HR, 3 runs scored, 2 RBI, BB, his fifth SB of the year, and a Brennaboner inducing zero strikeouts. That's kicking some Pirate tail.

Very honorable mention is due to Mat Latos. The big right-hander had a great day, striking out a career-high 11 batters over his 6 IP, yielding just 2 hits, 3 walks, and a HBP. Todd Frazier put another stamp on his big-league passport by homering, doubling, and making several great defensive plays at 3B, Jay Bruce extended his hit-streak to 9 games, Zack "MVP/GG" Cozart got on base in 3 of his 5 PAs, Aroldis Chapman was perfect in 1.1 IP, and Joey Votto was a ho-hum 1 for 4 with an RBI and a walk. He's so overrated. 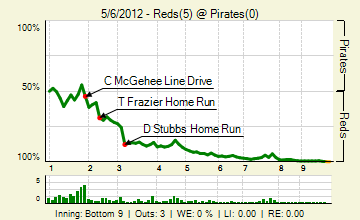