Tonight's game saw several Reds play great games, but the best player on the field was Johnny Cueto. Mr. Quest threw a complete game, striking out 4 while not yielding a walk. He gave up 7 hits, but only 2 were for extra bases, and he truly dominated the McCutchen-less Pirates.

Very honorable mentions are due for Drew Stubbs, Zack Cozart, and Jay Bruce, each of whom had two hits and a homer. Cozart and Stubbs went back to back in the 7th inning to break the game open, and Bruce crushed his 8th of the year the following inning. Chris Heisey also chipped in with a triple, single, and RBI, while Ryan Hanigan was also 2 for 4 with a double and an RBI, and once again called a great game. 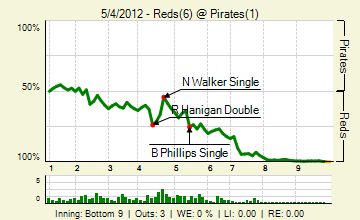