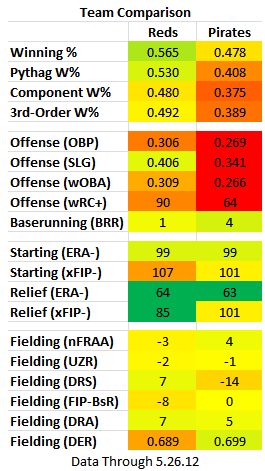 The Reds finished up an unbelievably successful homestand in lone possession of first place in the NL Central. They now begin a short road trip that offers a chance at more success: first up is the Pirates, followed by a trip to Houston to take on the Astros.

The Pirates are hovering just one game shy of .500. This year's iteration of the Buccos includes what has been a very respectable starting rotation, a good relief corps, and (in contrast to many past Pirates teams) solid fielding. What they're lacking is any kind of offense. They have Andrew McCutchen. But gracious, the rest of the team has been BAD. They rank last in the majors in wOBA (by 13 points!), OBP (by 16 points!), and wRC+ (by 12 points!). They're 3rd-to-last in SLG, second-to-last in ISO, last in BB%, first in K% (or is that last?)....this has just been a horrifically bad hitting team. I was going to make some special graphs to show this, but Bradley Woodrum did a nice job with this last week.

The Reds' offense continues to climb--and Sunday's game is not yet included in these numbers. They're showing nice power...but if they don't get people on base, they'll continue to lag in the below-average territory.

PNC park is my favorite among the handful of ballparks I've visited. It's gorgeous, has great views of the city, and has a wonderful feel to it. It also plays pretty fair, though slightly favors pitchers. It's not enough of an effect to worry about. 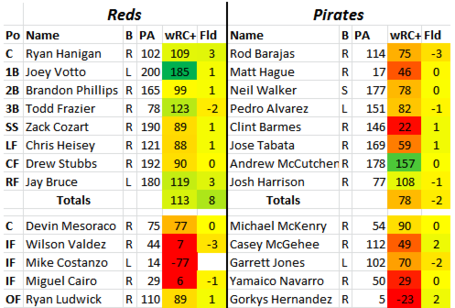 Clint Barmes is a guy I brought up several times a few years back as a good target shortstop for the Reds to pursue. The Pirates went after him, and it's been disastrous.

Lots of disappointments up and down this list. Pedro Alvarez hasn't been horrible, but he hasn't been good either. Jose Tabata has been extremely disappointing after the strong performances he has put up in previous seasons. First base has been a disaster: neither Garrett Jones or Casey McGehee, who started the season in a platoon, have hit, so the Pirates brought up Matt Hague. Hague is 26 this year and didn't make propect lists despite qualifying as a rookie. He hit .310/.373/.460 in his first year at AAA last year, though, and has a chance to be a decent little placeholder first baseman. I don't think he's a terrible hitter--just not good enough to offer much value at first base.

Andrew McCutchen continues to be The Man in center field. Josh Harrison has largely been an infielder in his career, and I remember seeing him play here in Altoona with the Pirates' AA franchise a few years ago. He doesn't have much home run power, but he'll hit some doubles and steal a few bases. Not much of a hitting talent in a corner outfield offensively, but he's a nice spare part as a good hitter with position versatility. In Pittsburgh, though, he's been their second-best hitter.

The Reds are looking a lot better after that homestand. I'm a big believer in avoiding black holes in the lineup, and for the first time the Reds are starting to move in that direction. I know Bruce has struggled badly of late. But I'd rather have solid hitting across the board (plus Votto being awesome) than Bruce and Votto being the only guys hitting. Let's hope they can keep surging.

James McDonald looks like he's having a breakout season. He's always been a nice talent, but this year is both striking guys out and avoiding the walk. He's still allowing a lot of fly balls, but so far those haven't really hurt him. Remember when the Pirates got him from the Dodgers for Octavio Dotel? That was a hell of a deal.

Charlie Morton is still doing the ground ball thing. And for the most part, it's working...especially because this year, he stopped walking people. He's not striking guys out, but you have a earn it with him.

A.J. Burnett is in his third straight year with a much lower xFIP than his ERA. I don't feel comfortable citing career numbers as we don't have xFIP for his first three seasons. But even if he is a guy who will routinely post an ERA that is 0.35 runs higher than his xFIP (ok, fine, that is his career difference, again omitting his first three years), you won't find a team in baseball who wouldn't take the performance he's given thus far.

All three of these guys have been excellent. With an average offense behind them, I'd be scared about the Reds' chances. As is, I see this as being pretty close. 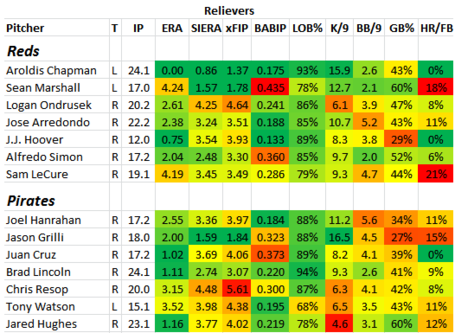 Wow, Jason Grilli has had a nice season so far, eh? He's walking too many and allowing tons of fly balls. But when you strike out almost two batters per inning, who cares?

Juan Cruz has the best ERA on the team, but his peripherals don't suggest that will continue. Hanrahan's also posting good numbers, but he's been pretty wild. He's a good pitcher, but it's hard to walk 6 per nine and be effective for too long.

I've always liked Brad Lincoln, and after a few years of more or less floundering at the AAA/MLB border, he seems to be pitching quite well this year. He's never shown strikeout numbers like this in his career, but he has 1st-round pedigree. Pitchf/x is showing much more use of his curve, and far less of his change-up, so we might be seeing a guy who will perform drastically better in relief than as a starter when you need to use all of your pitches. That said, if any of the Pirates' staff goes down before Jeff Karstens returns, I have to think that Lincoln's going to get another shot. He has made one spot start already this season.