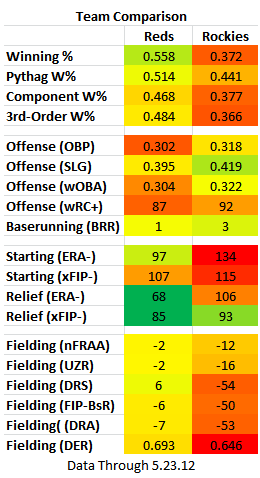 The Rockies pay their annual visit to Great American Ballpark this weekend. While initial reports indicated that the series would be determined by the outcome of a DnD Next Playtest, Wizards' server problems last night means that they ultimately will just play baseball. .. a'hem...

This is probably the worst Rockies team that I can remember seeing. Offensively, they don't look particularly strong, even before park adjustments. They have some power, but only average on base percentage...and when you play in Coors', that ultimately means this squad is a below-average squad.

Their rotation has kind of been a mess. Jhoulys Chacin has missed most of the year, as has the recently returned Jeremy Guthrie. And even when those guys have pitched, they've been dreadful. It's tempting to say that they sorely miss Ubaldo Jimenez, but Ubaldo has been a disaster this year in Cleveland. Granted, Drew Pomeranz has been demoted, but Alex White has thrown pretty well. Their bullpen has been ok.

And my goodness, the Rockies' fielding has been horrific. By UZR, they have been better only than the Mets among National League teams. And UZR is pretty rosy on them. The -50ish runs marks reported by DRS, DRA, and my home-brewed FIP-BsR stat are catastrophically bad. Some of that might be the park, as at least FIP-BsR is not really park adjusted. But... wow.

The Reds' fielding numbers--especially the last three measures--look improved compared to where they were with the last update. Ken had a nice piece investigating these data earlier this week, but I'm optimistic that we're seeing these measures adjust themselves as more data come in. I hope so, anyway. 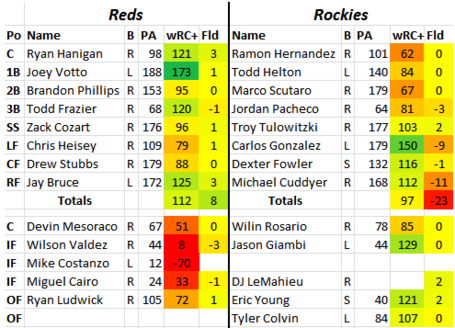 The biggest surprise as I look here (aside from Tulowitzki only being average...in my mind, he's always hitting 15 home runs per month) is Marco Scutaro. This is a guy who hit .299/.358/.423 last year for Boston, and .284/.356/.404 over the last three years. Granted, he's a 36-year old middle infielder, but going to Colorado I expected him to have another nice season (he's my fantasy team's shortstop...). Some of his dreadful .252/.315/.319 line thus far might be driven by the luck dragons, as he also is sporting a .265 BABIP despite an unchanged line drive rate. I know LD% is a crap stat, but if it stays high while BABIP drops, I think that means something...as opposed to when LD% just follows BABIP.

Jordan Pacheco got the third base job when Casey Blake didn't make this team out of spring training. Pacheco is a guy who flashed some nice walk rates in the lower minors along with a good batting average, but doesn't provide much if any power. Really, he is primarily serving as a placeholder until Nolan Arenado (currently in AA-Tulsa) is ready, which conceivably could be some time later this summer.

It's worth noting that while the Rockies' team fielding numbers are horrific, it's not necessarily all the fault of Carlos Gonzalez and Michael Cuddyer. Gonzalez has odd career fielding numbers: fine-ish in CF and RF, horrible in LF. Either something is different about him at the times when he's played LF (injured?), or he's unable to pick up the ball over there...or we're just seeing data that are small sample sized. Cuddyer doesn't have good career fielding numbers at any of his various positions...but he was a disaster at 2B last year, something that is included in the above number but is not something that the Rockies will ask him to do again.

Christian Friedrich saw his strikeout numbers take a huge hit last year when he moved up to AA. This year, however, he's seen them rebound, both in AAA (8 k/9) and now in the majors. He ranked as the Baseball America #14 Rockies prospect entering the season, so I don't think we're looking at an enormous talent here...but he did make their list. I really don't know anything more about him.

Jeremy Guthrie was a name that came up last year in the Reds' search for a starter. I was surprised that the Rockies targeted him, as he seems precisely the opposite of the kind of pitcher that would do well in Colorado. He doesn't throw hard, and doesn't miss bats. That said, his first 35 innings (and it is only 35 innings) have been positively dreadful, and far worse than anyone could reasonably expect from the guy. He's been a good pitcher, and I'm not convinced that he's washed up yet.

Jamie Moyer is really old. But he also is posting numbers that are pretty close to what you'd expect to see from Jamie Moyer throwing in Colorado. You can do worse from a low-cost pick-up, though, and there are a lot of teams who would be ok with a 4.40 xFIP from their #5 starter. Unfortunately for the Rockies, Moyer may well be their #2 or 3 right now, depending on where you rank guys like Juan Nicasio and Alex White...and Guthrie. 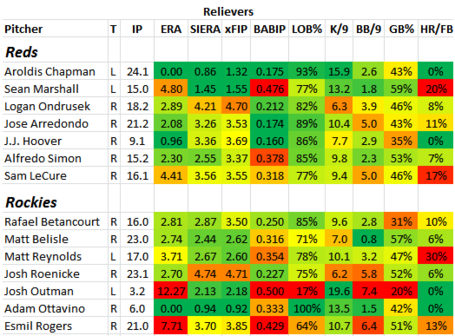 The Rockies' bullpen has been solid. They have a set of three guys who have done a nice job in late innings in Betancourt, former Red Matt Belisle, and Matt Reynolds. Also-former-Red Josh Roenicke has a nice ERA, but his peripherals--especially his walk rate--don't line up to that performance.

I posted this one twitter the other day, but it bears repeating: the Reds have the two best relievers in baseball thus far, based on a ranking of all qualified relievers sorted by xFIP. Also, I get scared when Dusty lets Logan Ondrusek pitch in the 9th inning.