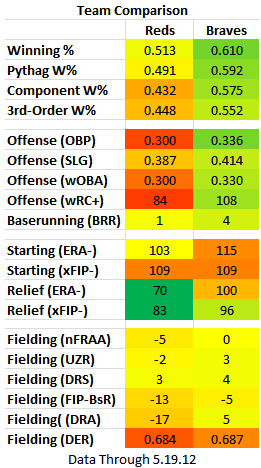 The Reds took two out of three from the Yankees, which was awesome. But they don't have much time to unwind, as a potent Braves ballclub comes to Great American Ballpark to kick off the week. We already know about the Braves, because the Reds just faced off with them last week. Therefore, I'm going to be pretty concise with this preview, except where there are new things to say. Like, for example, this Aroldis Chapman situation.

The short version of the Braves is that they are an offense-first ballclub, and that their rotation and bullpen have underachieved. They field well too.

You know the drill: GABP is a hitters' park, and is a great place to hit home runs. But it's not Coors Field, and ranks behind Coors (five times the effect), Chase Field (2.5x the effect), and Wrigley Field (twice the effect) among National League hitters' parks in terms of the overall park effect on run environment(tied for 8th overall). 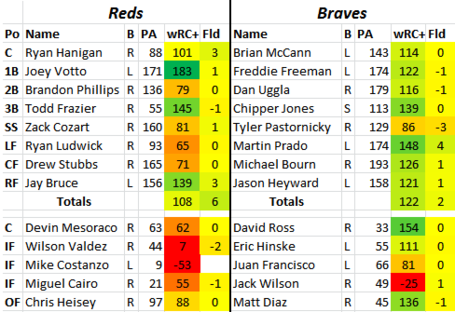 Not much new here from last week, except that Brian McCann's recent hot streak has his wRC+ above league average where it belongs. The Reds helped him with that last week.

Chipper Jones missed the weekend series after getting hit on the leg with a ball. I think he's scheduled to be playing again this week, though. Still, I'd expect to see Juan Francisco in at least one game during this series.

Also, I just can't understand why David Ross never got another shot at starting. I still see him as having legitimate starter potential. I can't evaluate the ephemeral catching skills (pitcher handling, framing pitches, etc), but the guy can throw, and he's always had power. He seems content to be the best backup catcher in baseball, though. 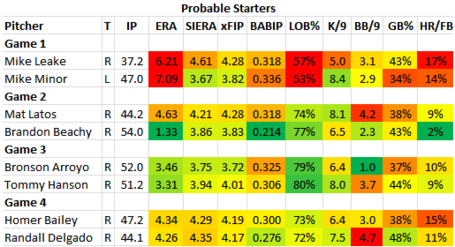 Mike Minor has almost certainly pitched better than his results. A 53% left on base percentage is other-worldly low, and speaks to some sequencing weirdness and/or terrible luck. But the scuttlebutt is that his job is in danger. I'm sure the Braves have plenty of teams that would be happy to receive him in a deal.

Brandon Beachy, however, has an ERA that looks like that of an ace, despite an almost identical xFIP to Minor. I don't know if deviations from xFIP are typically luck, short-term adjustments, short-term (unsustainable) skill, etc. But most of the time, pitchers throw much closer to their xFIP over the rest of the season than their ERA when the two differ.

Interesting note: last year, Beachy struck out almost 11 k/9. This year, that number is WAY down. Either we have a massive change in approach, or something's slipped. Still, he's a good pitcher having a great year. 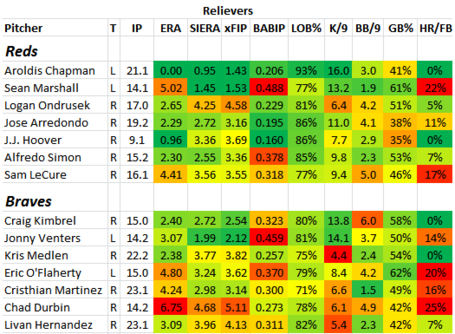 I think Aroldis Chapman is going to be very successful as a closer. He's got terrific stuff, obviously, and has a chance to have a season like Craig Kimbrel's 2011 campaign in what is left of this year.

I also think this is clearly not the best move. As Scrabbles showed beautifully Sunday morning, Sean Marshall has been pitching very well. I think there's a good chance that Marshall could outperform Chapman over the remainder of the season in the closer role, even though I think Chapman is probably the better pitcher.

But more importantly, Chapman should be in the frickin' rotation. I had 4 paragraphs written bitching about this. But ultimately, it doesn't matter what I think, so I've deleted them. Instead, I'll cheer for Chapman the Closer. Hope they can find some cool walk-in music for him.

As far as I can tell, because of the time he spent in the minors in 2010 and 2011, Aroldis Chapman will not be arbitration eligible until after the 2013 season. Based on his contract, that means that the final guaranteed year of his contract (2014: $3 M) will become a bonus and he'll go straight to arbitration-based salary starting in the 2014 season. The Reds should then control him through the 2016 season, if they can afford him. So, assuming that he doesn't break (...), the Reds still do have some time to play around with him as a starter before he moves on. I think they're likely to fall too much in love with him as a closer to do that. But Texas did it with Neftali Feliz, so you never know.