My favorite whipping boy, Ryan Ludwick, was the difference maker today. Ludwick went 3 for 5 with a honked wanger and a key 2-out, 2 run double in the top of the 9th to put the game out of reach. The guy has struggled mightily since he first donned a Reds cap, and had been held out of the last few games due to a swollen elbow caused by an R.A. Dickey "quick" ball, but today he kicked serious tail. Good on ya, Ludwi C.K. Keep this up and I'll gladly eat crow the rest of the year.

Very honorable mention goes to Johnny Cueto, who went toe to toe with a legitimate ace in C.C. Sabathia...and came out on top. Already the owner of the best ERA in the majors over the last season and a half, Cueto further cemented his status as an elite pitcher by putting in 7+ innings of 2 run ball on the biggest stage in the game. Fans in the stands were actually smiling by the 7th inning, as they'd finally realized their front office was going to offer the kid a $400 million contract when his current one is over. Hat tips, too, are deserved for both Sean Marshall and Aroldis Chapman, both of whom were effective in their new (swapped) roles.

I hope this doesn't get overlooked, because it's high time he himself stops getting overlooked...but Ryan Hanigan is a fantastic catcher, and the Reds are damn lucky to have him. Get off your butts, go to mlb.com, and vote for the guy to start the All-Star game. He won't win, and odds are the jerk in charge of the NL team will overlook him, but I dare you to find a more underappreciated, underpaid, unassuming player in all of baseball. I criticize Dusty Baker for a lot of things, but one thing he deserves high praise for is letting Hanigan become what he's become while Devin Mesoraco sits more than the Keith Law's of the world would like. Big props, guys. Big, big props. 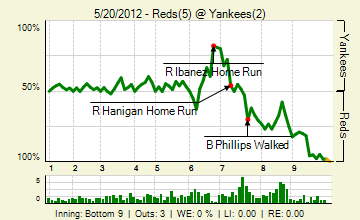