Closer than our closer would like; Reds beat Yankees, 6-5.

Today's victory was a well-rounded team effort, but our resident Canuck Wanger-Honker gets the nod for the JNMHSotG. Votto had the big knock of the day, a 3-run HR off Ivan Nova in the 5th to break open (at that point) the game. I'm not sure it wouldn't have been an inside-the-parker had it not just barely cleared the wall, since I doubt the Yankees outfielders would have known what to do with a Reds At-Bat that didn't end in strikeout.

Honorable mentions are due to Homer Bailey (quality start, keeping LH's Cano and Granderson at bay), Chris Heisey (2 for 5, RBI double, great catch in LF), and Devin Mesoraco (1 for 3, 2B, R, HBP, only Red to not K). Very extra-special Honorable mention to Mike Costanzo, who picked up his first major league hit (and his second RBI). Congrats, Mr. Sideburns. 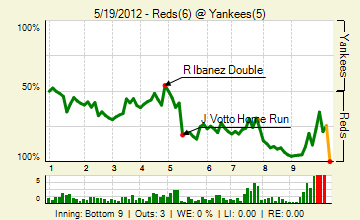