Share All sharing options for: Though it's probably not the first time, Honked Wangers haunt Arroyo; Yankees beat Reds, 4-0.

In a nutshell, tonight's start by Bronson Arroyo was a microcosm of his career as a Red. The bullpen had been taxed by a lack of deep starts by the other starting pitchers, his opponent on the mound was a former ace/future Hall of Famer, he was due to pitch in a park that promotes wangers...versus a lineup prone to honking wangers, and he gave the Reds a solid yet unspectacular effort. Arroyo made it through the first 7 innings having allowed only 1 run, and under normal bullpen circumstances he likely would have been lifted; however, he stuck around and got beat up a bit while saving the arms in the 'pen a bit. His final line: 7.2 IP, 9 H, 4 ER, BB, 4 K, 102 pitches.

Honorable mention goes to Chris Heisey, who went 1 for 3 with a walk, and to Zack Cozart, Joey Votto, and Jay Bruce, whose 8 combined strikeouts gave the fans a nice breeze on a muggy May evening in NYC. 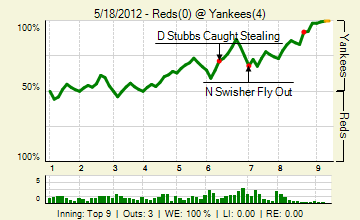 *FanGraphs had this listed as an "American League" game. I resent that.