Share All sharing options for: Series Preview: Reds at Yankees 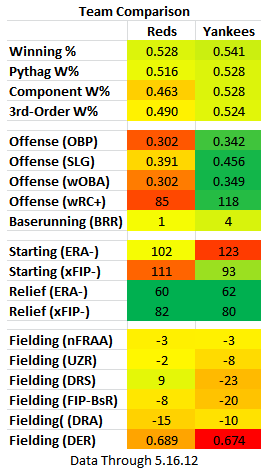 The Reds continue their stay in New York by taking on the Yankees this weekend. Despite their good-not-great record, this team scares me. They have (as usual) an outstanding offense, which currently ranks 3rd overall behind the Cardinals and the Rangers. Their starting pitching has been bad in the ERA department, but have posted excellent peripheral numbers that predict better things to come. And their bullpen has posted excellent numbers, though they're currently several men down with the losses of both Mariano Rivera and David Robinson. The only thing this team doesn't seem to do well is field. They pretty clearly suck a fielding, actually.

On the other hand, the Reds' fielding numbers continue to run lower than expected. I think they'll rebound, but I'm not sure that we can say this is a top-tier defensive team this year. I don't know what the issue would be however--aside from maybe Frazier and possibly Ludwick, everyone getting regular playing time has a good if not excellent defensive reputation.

This Yankee team would hit home runs anywhere. But the park does help. It has a third-highest park effect on home runs (overall--across both RHB and LHB's) in baseball, behind only U.S. Cellular Field (CHA) and Coors' Field (COL). 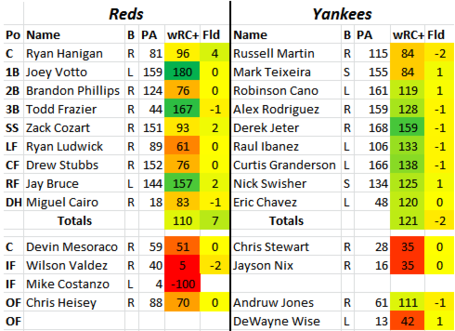 Quick hits...Nice to see Eric Chavez back in a lineup again--and having some success at that!...DeWayne Wise sighting!...Mark Teixeira hasn't posted a season with a BABIP over .270 since 2009. Despite that, he's posted .360-wish wOBA seasons each of the last two years. It's weird.

The Reds go against the un-retired Andy Pettite in just his second start since 2010. His first, against Seattle, wasn't much to write home about, but he did manage to go six+ innings. Not bad for a 40-year old in his first time back.

Both CC and Ivan Nova have much poorer ERAs than their other numbers indicate they should have. You can blame some of that on the poor defense behind him, especially in Ivan Nova's case with his .380 BABIP.

Nova is interesting, because historically his main tool for success seemed to be his ability to induce ground balls (51% GB% in 2010, 53% in 2011). This year, at least through 40 innings, he's seen his ground ball rates drop into average territory, while his strikeout rate has gone through the roof. This guy has never cleared 6 k/9 in a season in the majors, and now he's striking out almost one batter per inning. I haven't read much about a change in approach, but Brooks Baseball (best place to go for pitch classification data) is showing that usage of his slider has increased from 2% in 2010 to 13% in 2011 to 19% this year. His career whiff rate with that pitch is 21.5%, the highest of any of his pitches, so this could be part of the reason. 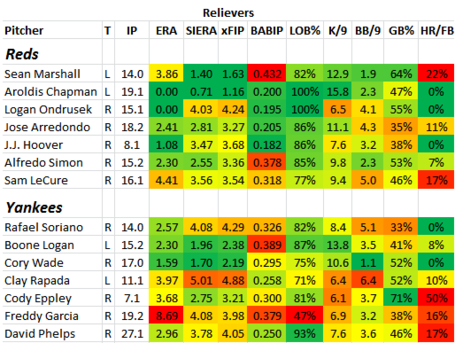 A few weeks ago, this was one of the best bullpens in baseballs. They effectively had three closers: Mariano Rivera, David Robinson, and Rafael Soriano. But Rivera is out for the year with a torn ACL, and now David Robinson is out with an oblique injury. So now...well, they still look okish. Soriano has been walking too many guys, but he's supported by Boone Logan and Cory Wade, both of whom have been outstanding.

Both Freddy Garcia and David Phelps have taken turns in the rotation. Phelps recently lost his gig with the return of Andy Pettitte. He's probably first in line to get it back if Pettitte fails to recapture the magic.