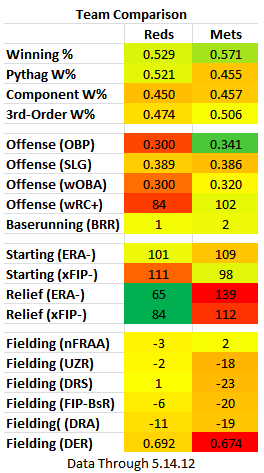 The Reds are off to the Big Apple today for the first of five games in New York: two vs. the Mets and then three against the Yankees.

The Mets are just two games behind the NL East-leading Washington Nationals (as I write this Tuesday), and have the exact same record as the Cardinals...but they're not playing nearly as well. Everything about their numbers indicate that they are something closer to a 0.500 team. On offense, they've been above average--they've gotten on base very well, but haven't shown much power. Their rotation has posted good peripherals, but below-average performances...I think several guys are likely to turn it around. The Reds are facing the guys who are arguably the #1 and #2 pitchers on the staff.

The bad news (for Mets fans) is that the other parts of their team have been terrible. The bullpen has been catastrophically bad, especially among the late-inning relievers. And almost all data indicates that this is a very, very bad fielding team.

I'm reporting these because they're the most recent data. But this offseason, the outfield walls were moved in substantially. This means that the park should play as a much more neutral park--if not a hitter's park--than it has in the past. Early returns don't support this, but they're meaningless at this point due to small sample sizes. I'd assume it's neutral until the data show otherwise, and we might not know that for a few years. 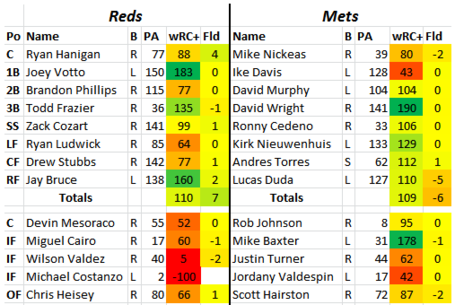 David Wright hasn't hit a walk-off grand slam as part of a three home run day this season. But he's hit just as well as, if not better than, Joey Votto thus far. It therefore appears that whatever the heck was wrong with him last year (back issues, etc) are not a problem this year. Kirk Nieuwenhuis came up to replace Andres Torres when he was injured earlier this season, started hitting and never really looked back. He had a terrific partial season in AAA last year, hitting .298/.404/.505 in 221 PA's, it's not ridiculous to think that some of this is real. But his 0.429 BABIP and 29% strikeout rate indicate that he's due for a substantial regression. His playing time is eroding now that Torres is back, and may continue when Jason Bay ultimately returns from his rib injury.

The Reds continue to get nothing from left field. I've seen lots of clamoring for Heisey, but Dusty has split PT more or less evenly between those two so far. Neither is producing. I'm more confident that Heisey will turn it around than Ludwick. Drew Stubbs keeps scuffling too, and Zack Cozart just dipped below the 100 RC+ mark. Joey Votto and Jay Bruce can't win every game...

Mike Leake is better than this. But it's getting to the point that keeping him in the rotation is hard to justify, especially when he has options left...and you have Chapman sitting in the bullpen.

I didn't have a lot of confidence that we'd see much from Johan Santana this year. But so far, we've seen a guy who is not all that dissimilar from the amazing performer he was from ages 24-26. He's still striking guys out at a high rate, and still showing good (though not great...at least not yet) control. He has always been fly ball pitcher; a 33% GB% at the end of a season might be below his career average, but would not be a career low. If he continues to strike guys out at the clip he has so far this season, there's no reason to think he won't continue to be effective.

And R.A. Dickey is a knuckleballer--and a good one at that. That's always fun to watch, so I'm looking forward to that match-up. 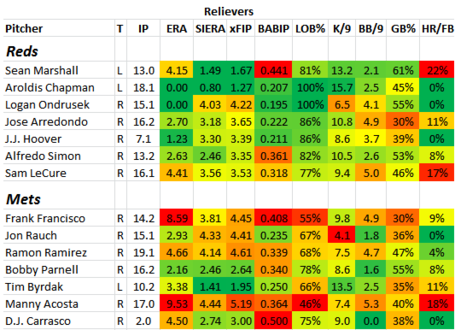 Yuck. You have some middle relievers putting up good performances in Bobby Parnell and Tim Byrdak, but the rest of this bullpen has been horrible. In 2011, the average relief pitcher's ERA was 3.69. They're just not getting that from their late inning crew right now. Now, whether that's predictive or not, I don't know. But the Mets are in for a world of hurt if Frank Francisco and company don't turn it around.

The Reds' pen on the other hand? Flipping fantastic. 'Course...you've got to get them a lead for them to win the ballgame for you.