Share All sharing options for: It's true, the Reds lost a get-away game. Braves 6, Reds 2.

Chris Heisey is heating up, collecting 3 hits in his second straight game. With a night to forget for Johnny Cueto, that's about all that went right for the Reds. Honorable mentions to Alfredo Simon for two shaky but scoreless innings and Ryan Hanigan for his two hits. 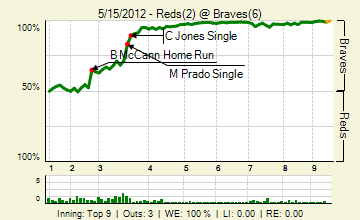