Red o' the Week, not read by the weak

Share All sharing options for: Red o' the Week, not read by the weak

Jay Bruce won Red o' the Week honors for the 2nd consecutive week last week, making him the first ever to win back-to-backs in the 657 year history of this most revered plaudit. The race was much, much tighter this time around though, as The Bruiser garnered only 26% of the vote - the lowest ever winning total for Red o' the Week. He won't be able to go for the three-peat though, as he didn't quite do enough to earn a nomination. His .778 OPS and three doubles were good, but not good enough for our selection panel.

Jam on with your week six noms:

Heisey makes his first appearance in one of these here thingies, mostly for his 3-3 performance in last night's win. For the week he got only 11 PAs, but he did a goodly amount of damage in his limited playing time. He slashed .333/.400/.556 with a pair of doubles, a walk, and a sac bunt. LF has been embarrassingly putrid so far this season, with a line of .192/.266/.331. Heisey is just as blame-worthy as Ludwick for this, but hopefully this past week is something of a sea change for Heisey and LF.

I was listening to the game on the radio last night and Chris Welsh said something interesting regarding Joey Votto and his lack of home run power this season. As of Sunday, he had only popped a pair of plinkoes in the first month+. Welsh said that Votto and hitting coach Brook Jacoby worked on his swing. He was dropping his hands to his chest as he loaded onto his backside, then bringing them back up before following through on his swing. This, apparently, was sapping his power.

So he stopped dropping his hands, and Sunday happened. Three wangoes, including a walk-off grand wango, and a double propelled the Reds to victory. Now, I don't know if the hands thing was really the cause of his lack of home runs. I mean, he was still leading the league in doubles going into Sunday, so it's not like he was making weak contact. But whatever, he killed last week . .438/.591/.1.125. That's a 1.716 OPS. Five extra-base hits, a steal, and (my favorite) six walks with only one strikeout. He is simply ungetoutable right now.

Arredondo is another Red making his first appearance on the ballot this year. He's been quietly brilliant all season, as he has twice as many strikeouts as hits allowed. It was a great week for him, as he threw three innings in the series against the Nationals, striking out five and giving up only one hit. Unfortunately, that one hit was a home rango off the bat of Danny Espinosa that proved the difference in a 2-1 game. But aside from that one blemish, he was awesomefrenchtoast.

Cueto faced off against Zack Greinke in a good ol' fashioned pitcher's duel last Wednesday, and our boy came out victorious. He pitched seven dominant shutout innings, scattering five hits and a walk with five strikeouts. Admittedly, Greinke had the better game, as the Reds only earned two hits off of him on the afternoon while striking out 11 times in eight innings. But Cueto matched him goose egg for goose egg, because that's what aces do. The Reds were able to tag the Brewers 'pen for a few runs and the win.

3.2 innings, seven strikeouts, one walk, one hit allowed, and this whoopsie doo: 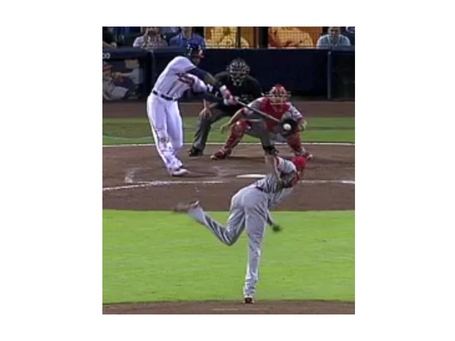 Vote for Red o' the Week, and then go on over to reds.com and vote for all of them to be All-Stars.