Coming into the game tonight, the Braves had sported the 2nd best offense in the league, were 7-2 in their last 9 games, and were fresh off a series sweep of the Cardinals in which they'd put up 23 runs in 3 games at Busch. Homey Badger didn't give a Heeringa, however, and held them in check for 6.2 IP. Bailey allowed 6 hits and 2 walks during his 114 pitch evening while striking out 3 and allowing just 1 ER. Hopefully, two things will happen: first, that Homer supporters can begin to cite more games like this for him being a legit starter (and less games against the Pirates, Astros, etc.), and second, that we we all become much larger Homer supporters. Somewhere, Newd Guy stands and applauds.

Honorable mention is due to Chris Heisey, who busted out of his season long slump with a 3 for 3 night that included a well-executed (if ill-advised) sacrifice bunt and 2 doubles, one of which drove in the 3rd run of the game in the 8th. Mercifully, Dusty is giving more time to Heisey, and I hope the guy will continue to seize the carp. 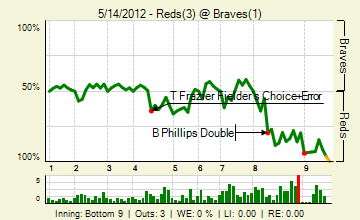