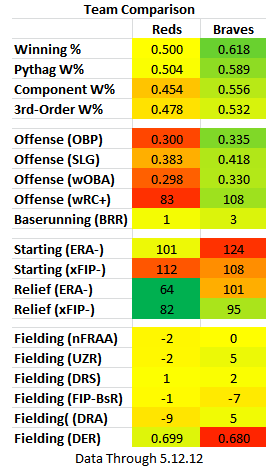 After a short homestand against the Nationals, the Reds head to Hot-Lanta to play a two game set against the Braves. After that, it's another short road series vs. the Mets before interleague play begins against the Yankees... This year's schedule seems borked to me...

In any case, thanks to Joey Votto's heroics yesterday against the Nationals, the Braves are now the #1 team in the NL East. And unlike the prototypical Braves' team, this squad is doing so largely with its hitting. This has been the #2 offense in the league. While they're a distant #2 behind the insanity that has been the Cardinals (.360 wOBA!! And Lance Berkman has been out for three weeks!!), this is a squad that can put up runs in a hurry. They get on base, they have power throughout their lineup, and can run the bases as well.

Where the Braves haven't been as good is their pitching. Their rotation, in particular, has been pretty rocky. And their bullpen, which last year was probably the best in baseball, has been merely average this year. The Reds have gotten far better performances to date.

Turner Field plays as a slight pitcher's park, though it's close enough that I'd treat it as essentially neutral. 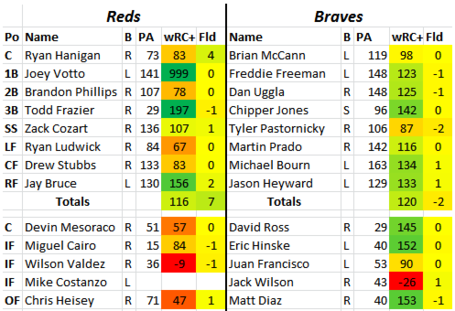 This has been a fabulous lineup. The rookie Tyler Pastronicky has hit about like you'd expect him to hit (not much, though not a catastrophe), but otherwise every single player in this lineup can hurt you. The guy I continually am surprised about is Michael Bourn. This probably stems from his 2008 season with the Astros in which he hit .229/.288/.300 with 41 steals, but I've always thought of him as a no-hit, all-speed guy with very little value outside of fantasy leagues. Over the last year or so, however, I've finally got it into my head what a player he really is. Over the past three years, he's been a 4.9, 4.7, and 4.2 WAR player thanks to quite good on-base skills and quality fielding. His gaudy stolen base numbers do probably make him overrated by the media...but the guy can play.

Speaking of guys who can play...Chipper Jones is having a very nice finale season on his way to Cooperstown. His knee, which was really bothering him early in the season, has reportedly been feeling better and better.

And speaking of Cooperstown, even though Sunday's data are technically not included, Joey Votto is so powerful that he broke my spreadsheet even before the databases updated.

I'm interested to see what Todd Frazier can do over the next several weeks. This is obviously his shot. I hope he is able to capitalize on the opportunity. It's kind of ironic to see this at the same time that the Reds square off against against Juan Francisco's new team.

Randall Delgado was the Braves' other rookie starter during spring training, next to phenom Julio Teheran. Teheran's in AAA, and Delgado has pitched pretty well thus far. He's walked a few too many, but you can do that when you strike out more than 8 per game and post a 51% ground ball rate. His ERA seems likely to improve.

Tim Hudson has only been back for a few weeks now. But he's doing what he does: modest strikeouts, low walks, and flipping fantastic ground ball rates. Hudson broke into baseball in 1999 as a 23-year old and has a 59.1% ground ball rate over his entire career. That's amazing. 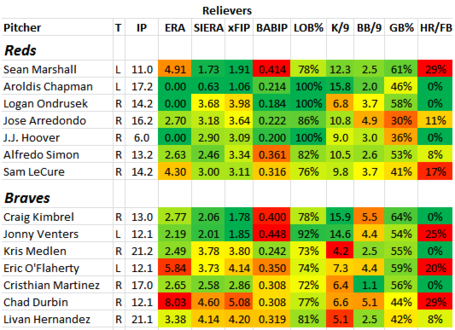 The Braves still have that fantastic duo of Craig Kimbrel and Jonny Venters at the end of the game. Both have been a bit wild this year, however, and while they're still extremely scary, they have at least been mortal. I've long liked Kris Medlen too, but despite the nice ERA, his strikeout rate has been much lower than usual--he's coming off of TJ surgery, and it may be that he's not quite back to where he was two years ago.

And this is where Livan Hernandez ended up. He seemed to have a rotation job with the Astros at the start of spring training, but didn't make their roster and signed with the Braves. Prior to this year, the last time he'd pitched in relief was his 3-inning major league debut in 1996. For a guy who never really had any one outstanding skill, Hernandez has had a heck of a career: 3100+ innings (10 seasons with 200+ innings), 474 starts, just shy of 2000 strikeouts, 36 WAR... he's been the definition of durable.