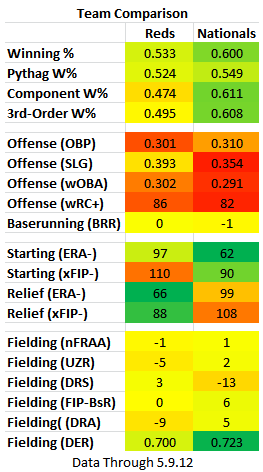 The Reds return for a very short homestand against the Washington Nationals. The Nationals have struggled a bit of late, but are in the middle of a fantastic season that finds them (as of Thursday evening) at the top of the National League East. A glance at their team stats shows that this is almost entirely the result of their starting rotation, which has been fantastic. The return of a healthy Stephen Strasburg, a Gio Gonzalez with control, a healthy Jordan Zimmerman, an effective Edwin Jackson, and a suprisingly superb Ross Detwiler has been a revelation thus far. And they're not just getting lucky (although certainly they have gotten a bit lucky)--this rotation is second only to the Phillies in xFIP (3.28, vs. the Phillies' 3.16).

There's not much else going on with this team, however. Their offense has been decimated by injuries all season, and has a few very exciting players...but has generally been atrocious overall. The bullpen has been below-average. And the fielding..well, it's probably actually quite good, though Baseball Info Solutions' DRS rates them well below average.

Still, top-notch starting rotation performances go a long way. By every overall team measure (winning percentage, Pythagorean wins, etc), this team has played better than the Reds. They have a legitimate shot at a playoff berth. The Reds may have their work cut out for them.

GABP's not the best hitters' park in the majors, but it's among the best places to hit home runs.

Small methods change here: "Fld" is a combination of 3-year averages of UZR, TZR, and FSR, plus this year's nFRAA (because 3-year averages are hard to do). All of this is pro-rated to this year's innings. I'm doing this because I don't even trust fielding data at less than a season level to tell a historical story, much less be at all predictive. Hitting stats aren't very predictive yet either, but at least they are telling you something about how well a guy has been hitting this year. 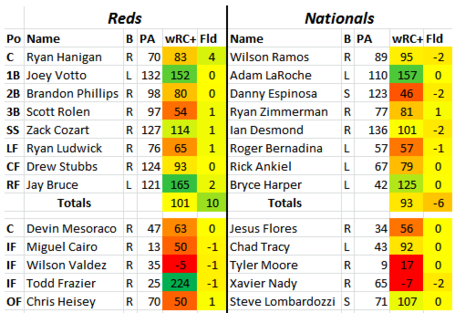 Ladies and Gentlemen, Bryce Harper has arrived in the majors. He's already so annoying that pitchers are throwing at him without apparent provocation, and getting back at those pitchers by stealing home. Time will tell if Cooperstown inducts him into the Hall of Fame after the typical 5 year waiting period, or if they just go ahead and put him in once he gets his Rookie of the Year award this year.

A few other quick hits: this lineup is missing Jayson Werth and Michael Morse. It'd look a lot better with those guys instead of Roger Bernadina and Rick Ankiel. Adam LaRoche is off to a fantastic start, which goes against his reputation (claims about guys being fast or slow starters are, in my opinion, generally a bunch of hooey...at least in terms of prediction). And finally, the scuttlebutt in spring training was that Danny Espinosa might slide over to shortstop if Ian Desmond didn't hit well in the first half. Espinosa was a 3.5 WAR player in 2010, with plus power and (supposedly--scouting likes him, metrics aren't so sure) plus fielding to make up for the low contact. But his strikeout rate is up and most of his plate discipline numbers are getting worse...it's been a miserable year so far. Desmond, by contrast, has hit just fine. I've always liked Ryan Zimmerman a lot, so don't ignore him--he just came off the DL.

Reds: Drew Stubbs had himself a nice four games since our last update, hitting .353/.389/.647 and improving his wRC+ from 74 to 93. Go Drew! With his fielding, a solid-average offensive performance makes him a 3+ WAR player. That's worth $15 million a year on the free agent market...

From a baseball fan perspective, I'm bummed that the Reds are missing Strasburg, who pitched last night. But all of their starters have been superb thus far. The knock on Gio Gonzalez has always been that he walks too many, but that hasn't been a major issue this year...and on top of that, his strikeout rate is up. Zimmermann's strikeout rate is down, but he has been getting tons of ground balls and (as usual) hasn't been walking anyone. Edwin Jackson is pitching like he did in 2010, except that he isn't walking anyone. I don't know if they can keep this up, but this staff has been legitimately outstanding.

I'm not sure what to make of Mike Leake. Leake's skill has always been ground balls with no walks to make up for his modest strikeout rate. That's not happening so far this year, and his strikeouts are well below his career average. His swinging strike %, however, is actually up, as is velocity. It almost suggests a difference in approach, but it could also just be a small sample size issue. I've always liked Leake, so I hope he can get it going again. This is a good offense for him to take a step forward against. 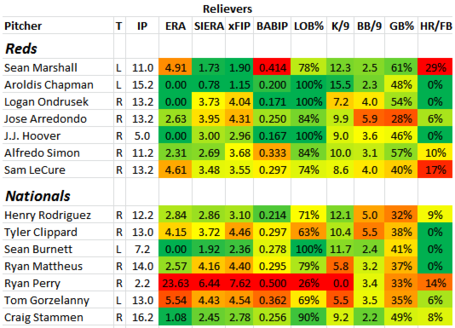 Henry Rodriguez has done a good job in the closer role for the injured Drew Storen, but last year's closer-for-a-while Sean Burnett has been even better. Tyler Clippard is usually a force, but he's been too wild this year to be his usual self. I usually make some quip about Tom Gorzelanny belonging in the rotation at this point, but a) their rotation has been spectacular, and b) Gorzy hasn't pitched very well. It's all small samples, of course.

Speaking of small samples, J.J. Hoover has been fabulous so far. If this is real, then I'm happy with that as the return for Juan Francisco. Francisco, meanwhile, is hitting .234/.275/.489 for Atlanta...which is the equivalent of roughly league average this year. That's about what I think he's capable of doing.