What did Jay Say? Going the Other Way

Share All sharing options for: What did Jay Say? Going the Other Way

After Sunday’s two home-run performance Jay Bruce told reporters, "I got a pitch I could handle and I put a good swing on it. It was a fastball, middle away. I have an approach that I've really worked on, and that kind of fell into place for me." Bruce hit a game-tying home-run in the bottom of the 9th. The ball was a laser beam, hit to left-center. Bruce now has 3 HRs in 3 games. Two of his HRs have been to dead-center or left-center, equaling the total of HRs Bruce hit to dead-center/left-center all of last season.

After Opening Day, I touched on this idea of Bruce’s new approach at the plate. At the time, it was really just speculation and observation. Bruce’s comments seem to confirm that speculation. How might this new approach change things for Jay?

To this point in his career, Bruce has been a very productive hitter when he pulls the ball to right field. Last year, Bruce was one of the best pull-hitters in baseball, ranking 4th in the MLB with a 1.374 OPS. Conversely, Jay was one of the worst hitters in baseball when going the other way. His OPS for balls hit to the opposite field was .423 (only 14 MLB hitters were worse). Bruce’s inability to effectively hit the ball to the opposite field might also explain his dramatic hot and cold streaks. A hitter who relies on pulling the ball is more susceptible to prolonged slumps.

This spray chart puts those numbers into a visual. 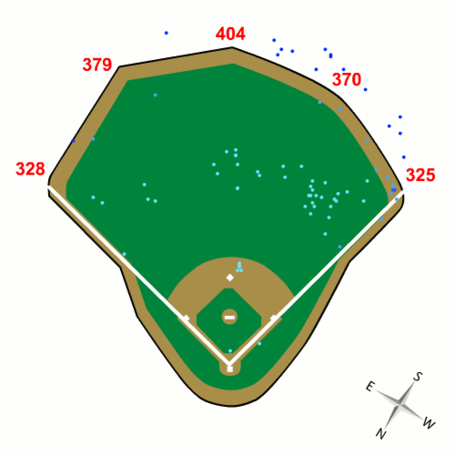 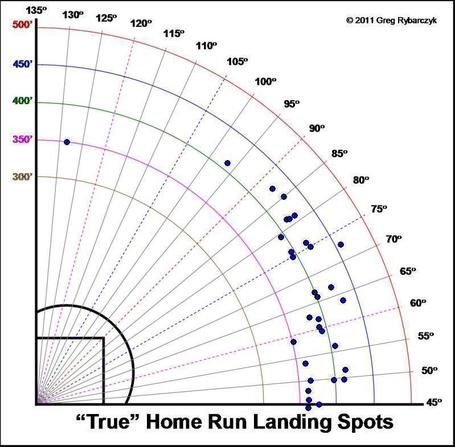 If Bruce is able to adapt his approach at the plate and hit the ball to the opposite field more often, he will likely improve his batting average and OBP in the process. Some may fear that a change in approach would take away from his power, turning him into a "slap" hitter. However, as Joey Votto has demonstrated, you can still produce plenty of power when hitting the ball to all fields, especially at GABP. 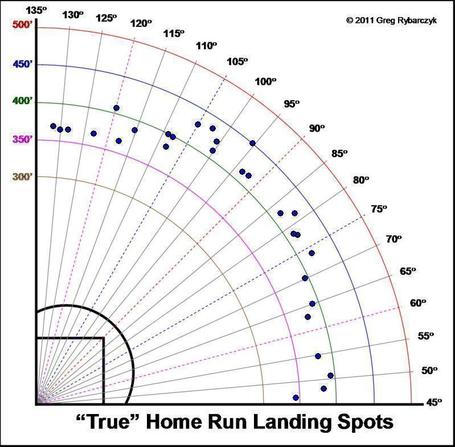 Furthermore, the ability to hit the ball to all fields is what separates the great hitters from the very good hitters. The top 10 opposite field hitters in 2011 included the following players: Adrian Gonzalez, Joey Votto, Ryan Braun, Prince Fielder, Matt Kemp and Joe Mauer. Perhaps Bruce is learning from his Canadian teammate… Perhaps Bruce is on the verge of joining this list, moving from a good hitter to an elite hitter.