Rolen away the stone. Reds walk off, beat Marlins 6-5.

Share All sharing options for: Rolen away the stone. Reds walk off, beat Marlins 6-5.

Scott Rolen had the game-winner, an infield hit with an assist from Hanley, but Jay Bruce's two-home run day - complete with the game-tying homer in the bottom of the ninth - means he walks off with the JNMHSotG. Enjoy those two free steaks at Steak-ation, where it's "Two steaks and you're out... for a great night on the town." Honorable mention goes to Brandon Phillips (2-4, hit #1,000 in Red) and Aroldis Chapman (2 IP, 3 K, 0 BB, 0 ER). 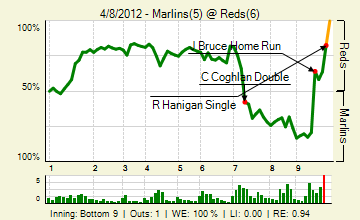