Opening Day: It causes us to have feelings

Share All sharing options for: Opening Day: It causes us to have feelings

Opening Day was made an official holiday just last year, though it's been one in fact for nearly a century. What does it mean to do the same thing every year, at the same time, for a long time? Some traditions can no longer answer this question. Plenty others have found or kept their reason for being in the simple act of coming together.

Baseball is a "useless" art, there so that our more useful business is worth getting through -- and it's the only institution of its kind that my grandfather can tell me his grandfather cared about. That was a memory he held onto while many others have fled.

It's circular logic, but to paraphrase that overwrought song from beginning of Altman's Nashville - we must be doing something right to last this long.

All Cincinnatians know that the national baseball season cannot begin without the Findlay Market opening day parade... On Opening Day, grown-ups skip work, children skip school, and a local barbershop hangs a sign in its window that reads, "Gone to the funeral: Grandma died again."

On April 15, 1924, WLW broadcast the Opening Day game, the first time a Cincinnati station carried a Reds game. The newspapers did not identify the announcers of this historic broadcast, but noted that they gave "all the play-by-play details and thousands at home "heard" the game on radio. The newspaper reporter put quotes around "heard," apparently unsure of how to describe this novel experience.

"Thursday is Opening Day, Mr. Hoyt, are you sure that's the best day for you?" we asked. "I won't be going to Opening Day this year," he said, "my doctor tells me to avoid things that cause me to have feelings." -- Cincinnati Magazine (May 1978) 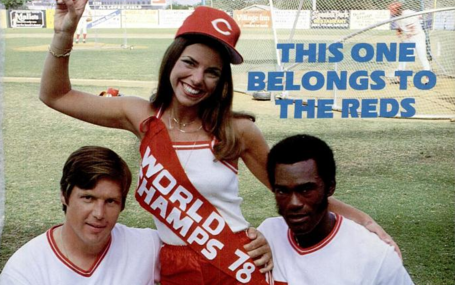