Continuing our coverage of the Reds farm system, we have the unfortunately named Pensacola Blue Wahoos.

After a two year stint with the Carolina Mudcats, the Reds open the 2012 season with a brand spankin' new AA affiliate in the sunshine state. The Mudcats' last year in the Southern League was not pretty. The team managed a 53-86 record with most of the premier organizational talent at low A and AAA last season. This year, however, should be different. The roster features five of our top 25 prospects (according to the community rankings), and should see a few others move up from Bakersfield before all is said and done.

Full roster and breakdown after the jump. 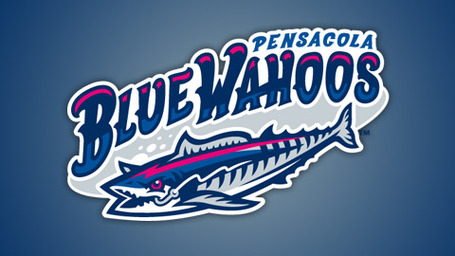 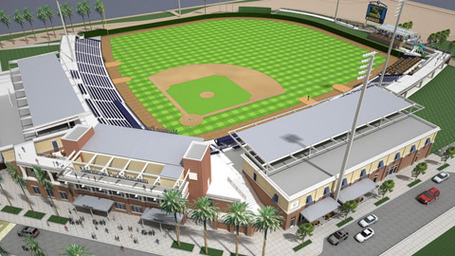 The Wahoos new $18.5 million, 5,000+ capacity stadium looks pretty slick. The open outfield, which will feature a Tiki Bar (so you can get good and #drunj), has panoramic views of the Pensacola Bay and the Gulf of Mexico. The stadium is located on a new development which seems similar to the Banks, that features an amphitheater, retail shops and restaurants, as well as a public park. All in all it sounds like a great place to take in a ballgame, and a big change from being stuck in the middle of nowhere in rural North Carolina.

Since no games have been played yet, there really isn't any way to know how the park will play. The park sits right at sea level, and the humidity is high enough to piss off an orchid in the summer, so it wouldn't be surprising to see offense stymied a bit by the new stadium. Park factors for most Florida State League stadiums have them either neutral or pitcher friendly. I've yet to find dimensions for the playing field, but it doesn't look any bigger than most minor league parks.

Daniel Corcino: Lil' Cueto makes the jump from Low A to AA this year, bypassing Bakersfield altogether. Corcino's line last year in Dayton put the prospect junkies on notice: 3.42 ERA, 10.1 K/9, 2.2 BB/9, 0.6 HR/9. Corcino's size is the main cause for concern, as he is listed at only 5'11". He has excellent control and BA considers his fastball the best in the system. Corcino is a consensus to 5 prospect now, and at the age of 21, he might be looking at a chance for a rotation spot once the Arroyo window mercifully closes.

Henry Rodriguez: Could Hank-Rod (are we allowed to call him that?) be the heir apparent to El Beeperino? There are no questions about his bat, as his career MiLB line in 5 seasons of .307/.358/.445 can attest. Unfortunately, the glove. His defense is the main knock against him, and scouts seem to think he is lacking in the mental make-up category. With the likely departure of BP after this season, a good year for Rodriguez could put him in the mix for 2B in 2013.

Didi Gergorius: The polyglot prospect turned a lot of heads this year in his first big league camp. Fay and Dusty were falling over each other complementing his defense and baseball IQ. In the few times I saw him this spring, he lived up to the hype, as he clearly has great range and a great arm. He can be a bit overaggressive at the plate with the tendency to rack up a lot of strikeouts (don't tell Marty). If he can continue to hit, he will likely be in the 'Ville by the end of the summer, and may see a September call-up.

J.C. Sulbaran: The 2008 30th round pick, Juan Carlos Sulbaran took a big step forward last season, posting the best HR/9 (0.7) and SO/BB (3.10) of his career. Giving up the longball has been a bugaboo for J.C. for most of his professional career. His numbers last season look even better when you consider he was only 21 and pitching in the offensive friendly California League (4.60 ERA vs. 3.29 FIP). He commands three pitches well, with the yakker being his best pitch. His mechanics are said to be a little wacky, causing him to stay up in the zone a bit too much. Hopefully Mr. Perfect can show him some things.

Ryan LaMarre: Hedy needs to improve his power numbers a bit if he wants his stock to rise. He was battling leg injuries last season, so perhaps he can improve on his .370 slugging percentage from 2011. Lamarre's defense is by all accounts solid. He was drafted in 2010 out of the University of Michigan, hopefully he can continue the run of successful Wolverines-to-Reds that includes Barry Larkin, Chris Sabo and Hal Morris.

Other Notes: Mike "AquaVelva Man" Costanzo will be manning 1B this year. Chris Manno (the guy we got for Jonny Gomes) looks to stay on track after posting great numbers in Bako last year. John Sickels is high on Tim Crabbe, who also posted a solid line in the difficult California League despite relying heavily on only two pitches. Donnie Joseph was out of his element last year and needs to get back on track. 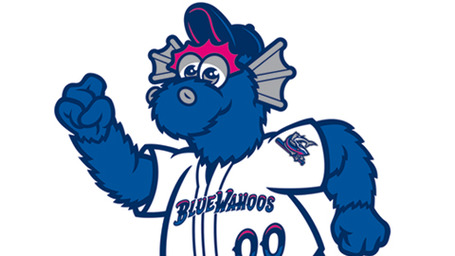