Share All sharing options for: Luck Off! April Sours Bring May Powers?

Your Cincinnati Reds are off to a mediocre start to the season after posting a 11-11 record in the month of April. Despite the lackluster start to the season the Reds enter the month of May in 2nd place in the division, just 3 games behind the St. Louis Cardinals. After generating very little offense in their first 10 games, the Reds’ bats have heated up, scoring at least 4 runs in 9 of the last 10 games. As a unit, the Reds pitching staff has been very good. Despite 40% of the starting rotation underachieving, fans should be pleased with a team ERA of 3.53 (compare to 4.16 in 2011).

The Reds’ offensive surge over the last few games is encouraging, yet for the season the team still ranks in the bottom half of the league in runs (10th) and OPS (10th). Surely the pitching has improved, but a drop in runs scored, from 2nd in the NL in 2011 to 10th this year, would certainly offset any gains the team has made in the pitching department. The good news is, the Reds’ ranking in the bottom half of the NL is unlikely to continue for much longer.

There are two key stats that suggest the Reds have been extremely unlucky with the bats this year: BABIP & HR/FB. Let’s start with BABIP (Batting Average on Balls in Play). Interpreting BABIP data can be difficult. An extreme deviation in BABIP is typically attributed to "luck." Yet there are some players (Ichiro Suzuki, Joey Votto) who can sustain abnormally high BABIPs for various reasons. When looking at a team’s cumulative BABIP however, the data is much more stable and predictable. To put things in perspective… Since 2009, only one team posted a BABIP outside of the .280-.320 range (Blue Jays, .269 in 2010). The vast majority of teams during that time frame posted BABIPs between .290-.310.

So how are the Reds stacking in up in 2012 in terms of BABIP? As of today, the Reds rank 10th in the National League. 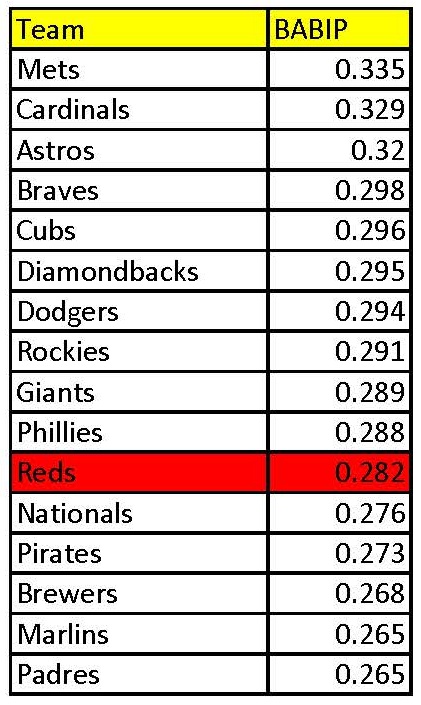 Going a step further, if the .282 BABIP holds up, the 2012 Reds would have the 2nd lowest BABIP of any Reds team since GABP opened. 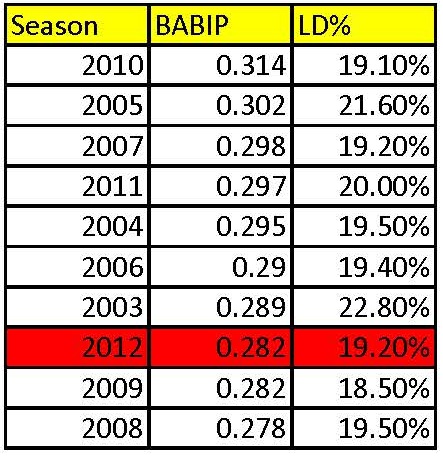 Another important stat to consider when determining "luck," is HR/FB (Home Runs per Fly Ball). It's important to realize that various ballparks influence HR/FB rates significantly. In Cincinnati, for instance, Great American Ballpark typically allows the Reds to post an above-average HR/FB ratio. Since the 2003 opening of GABP, the Reds have ranked in the top half of the league every season in HR/FB, and have ranked in the top four every season but one.

As of today, here are the National League rankings. 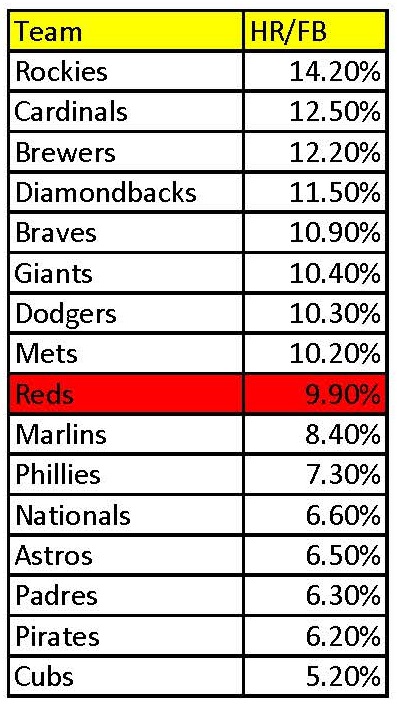 If these rates continue, the Reds would rank in the bottom half of the NL for the first time since GABP opened its doors. 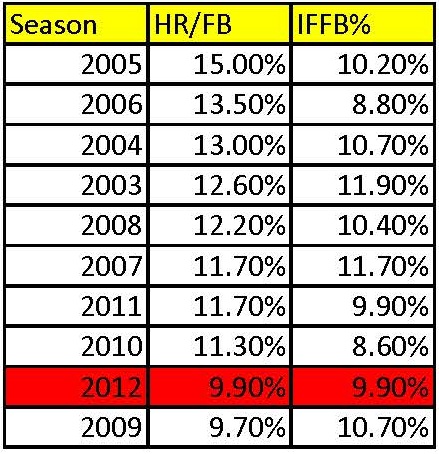 Also listed is IFFB% (Percent of fly balls to the infield) in order to show that the 2012 Reds aren't simply hitting a bunch of pop-ups. Often times, especially with small samples, a low HR/FB ratio (and even a low BABIP) can be attributed to infield fly balls, which are the most likely type of batted balls to result in an out. Obviously, that's not the case for the 2012 Reds.

It's possible that this isn't just "bad luck." Maybe the 2012 Reds are the worst power-hitting Cincinnati team in over a decade. However I have a feeling that this team will end up where they have every year since they opened to doors to GABP, among the top of the league.

And just think... If this team can play .500 baseball despite being "unlucky" at the plate, imagine what they can do when bloops start falling in for hits!