Who? - The 2012 Bakersfield Blaze Preview

Share All sharing options for: Who? - The 2012 Bakersfield Blaze Preview

Bakersfield is like that girl you date for 2 weeks after your girlfriend of 3 years dumps you: hot (average July temperature of 97.8 degrees), distant (2,206 miles from Great American to Sam Lynn Ballpark in Bakersfield), and totally crazy (a team scored 15+ runs twice as many times as they were shut out. Also...games like this).

You'll see a lot of familiar faces in Bako* this year, as a large chunk of the better players from last year's Dayton Dragons roster have been promoted. Let's take a look, after the jump! 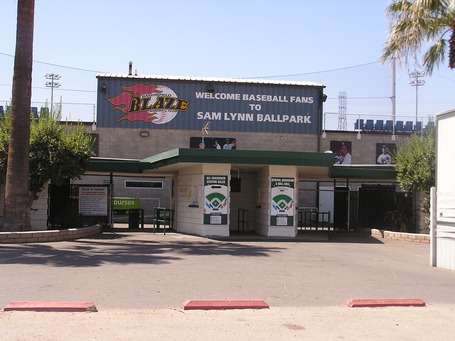 *When -ManBearPig asked Donald Lutz if he was headed to "Bako" to start the year, he responded with this face, so I guess no one but us Red Reporters refer to it as "Bako." 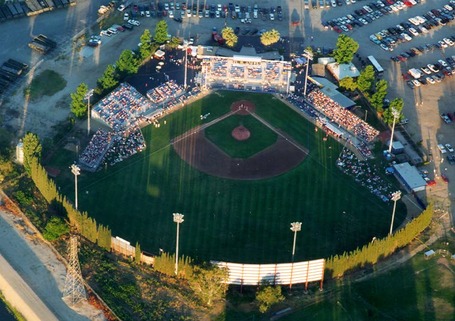 Sam Lynn Ballpark is certainly no Fifth Third Field, and its attendance probably suffers from the fact that it's as close to Hawaii as it is to Cincinnati. I have never been to a game there (has anyone?), but hope to make it up there at some point, as it's a mere 6 hour drive from San Diego.

Billy Hamilton, SS: What is there to say about young Billy Quix that hasn't already been said? Grand Theft Bases: Snax City should continue to improve as a switch hitter while continuing his felonious pursuits. The biggest uncertainty surrounding Hamilton seems to be whether or not he can stick at SS long term. There's no question he's got the range, but the arm strength remains suspect. Regardless, he's the starting shortstop for the Blaze, so it'll be fun to watch him embody the team's name on the basepaths this season.

Tony Cingrani, SP: After dominating rookie ball in Billings, the 2011 third rounder is skipping Dayton altogether and heading straight to the California desert. The 6'4" lefty was lights-out as a starter last season, posting a freakish K/BB ratio of over 13 and more than 14 K/9 in an albeit small 51.1 inning sample. Cingrani was a reliever throughout his college career, and most scouts seem to think the bullpen is his most likely path to the majors due to a lack of passable secondary pitches - to complement a pretty gnarly fastball that touches 97. Some Reds coaches have disagreed, saying his offspeed pitches have developed nicely, and could eventually become polished enough to fool major league hitters. Time will tell, but it's important to look beyond the surface numbers Cingrani puts up in Bakersfield, as his new home park is a notorious wasteland for traditional pitching stats. In particular, if he can sustain above-average K/9 and K/BB rates over an increased workload, that's a good sign.

Yorman Rodriguez, OF: Another guy who's been talked about a ton is OurMan, the human tool shed. Still just 19 years old, Y-Rod* still probably deserves the benefit of the doubt, though some frustration is understandable. His big batting practice power has yet to translate in-game (career high .139 ISO in 2011), however, and there's some question as to whether he can stick in CF. I'm less concerned about the latter, but until he can figure out his contact issues, the former is still troubling. It's a bit surprising to see him sent to Bakersfield after a mediocre 2011 in Dayton, but perhaps the org is hoping the offense-boosting environs there will help his confidence. He's always played above his age level, so it's best to continue to be patient and hope for some marked improvements.

*Y'know, let's not use this nickname. We're better than that.

Tucker Barnhart, C: The 2009 10th-round catcher is a defensive whiz who could continue to rise up prospect boards if he keeps hitting. The young Indianan posted a respectable .273/.344/.387 line in Dayton last year, and while he doesn't have much HR power, he did rope 24 doubles in 326 ABs in the Midwest League. Coupled with his prowess at catching would-be basestealers (Nickname idea: ADT), Barnhart is someone to keep a 'creds keen eye on moving forward.

David Vidal, 3B: Vidal is an interesting guy. One of several promising 3B in the system, he had a solid 2011 in Dayton. Vidal posted an .847 OPS to go along with 20 HRs. Here's some video of two admittedly unimpressive swings (a foul and a pop out) I took when we watched a minor league scrimmage against a team from China during our trip to Spring Training this year. Check out that arm angle!

Kyle Lotzkar, SP: Unfortunately, the elbow. It's easy to fantasize what could have been with Lotzkar - Cincinnatians full of weird, pseudo-Canadian pride after Joey Votto wins the 2015 MVP award and Lotzkar the NL Cy Young, leading the Reds to their third straight World Series title. Votto and Lotzkar could be collectively referred to as the Red Toonie, but alas. Lotzkar had huge potential coming out of high school, but a string of injuries has significantly slowed his progress. Last year was his healthiest as a pro, and despite a rough beginning of the year, he turned it on down the stretch, and finished with a solid K/9 (9.72) and WHIP (1.14). I suppose I'm cherry-picking the stats a bit, but there is reason to be at least mildly hopeful. At this point I'd take any solid major league production out of him, and he does have upside.

Donald Lutz, 1B: The big Knockwurst is on the record with Red Reporter not only professing his allegiance to the Reds, but also promising to "tear it up in Bakersfield so [he] can get to Florida." I guess he was embarrassed to say "Blue Wahoos" out loud. Lutz has big raw power, though his game is still developing, and he posted a solid line of .301/.358/.492 last year with 20 HRs in 465 ABs (and 3 triples!). He and Lotzkar are the only two Bakersfield players on the Reds' 40-man roster.