Share All sharing options for: Put your brooms back. Reds lose, 6-5.

Jay Bruce went 3 for 4 with a HR, 2 runs, and 2 RBIs. Homer Bailey gets the honorable mention nod with a Quality Start, allowing 3 runs (2 earned) in 6 1/3 innings. He struck out six, walked two, and didn't allow any HRs. Logan Ondrusek followed with 1 2/3 scoreless. That should've meant the ballgame, but Sean Marshall gave up a 3R HR in the top of the ninth to lose it. 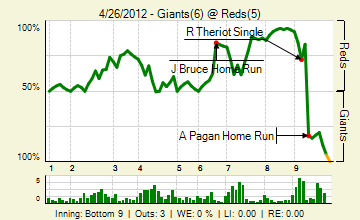