We go back (again) to the magical 2010 season to visit the Tax Day Edition of the Reds Reposter. As much as things change, they still stay the same. Paul Daugherty has no use for "them fancy-prancy statistics." Drew Stubbs is striking out a lot. Homer Bailey remains an enigma. Meanwhile, our friend Justin is "smooth and swab (sic, duh!)." Oh, and people are overvaluing Paul Janish due to small sample sizes and by falling for the assumption that the devil you know is worse than the devil you don’t. Paging Willie Harris!

Monday: Your ‘Cray’ For the Day

We all give Walt a bit of deserved grief for his love of former Cardinals. Whether it be Ryan Ludwick, Scott Rolen, Jason Isringhausen, Edgar Renteria, Miguel Cairo, Jim Edmonds, or the cast of thousands of others, Walt has gravitated toward his former players from the Gateway to the West. However, we learned today that Walt may have tried to snag the Dirtiest (dirty as in talented, not like Yadier-dirty) of all Birds: Albert Pujols. Of couse, had Jocketty done this, we wouldn’t be able to enjoy the next Votto decade. Though, if the Reds did sign Pujols, Dusty would have gained a legitimate reason to bat Jay Bruce fifth instead of cleanup.

Tuesday: BUT PAAAAAAWL, THEY NEED AN OUTFIELDER!

In an effort to stir up fodder for local sports talk hacks personalities, the Reds, as part of their pact with Satan Clear Channel, have decided to honor the UK Wildcats next week during a game against the Giants. Sure, the Reds claim the honoring is to help promote ties with the state of Kentucky. However, the real purpose was to make the talking heads stop complaining about baseball stuff and instead play the role of hall monitor between UC, XU, and UK fans during the month of April:

In an effort to remain as ridiculous as Jose Canseco and his corresponding Twitter feed, Lenny Dykstra is back in the news again. This time, however, it doesn’t have to deal with a stock market scandal. It also doesn’t have to do with defrauding a bankruptcy trustee. Heck, it doesn’t even have to do with any other financial misgivings. Rather, it involves exposing himself to women who contacted him on Craigslist. Somewhere, on a 7 Train going between Manhattan and Queens, Randy Wolf is smiling looking for love.

Thursday: If It Gets Page Clicks, It’s a Good Article!

Hey, remember that one April about a decade ago when the Red Sox thought that Shea Hillenbrand would be the next .400 hitter for their franchise? That didn’t seem to turn out they way they thought by May. By mid-season, Shea was traded to Toronto and had quickly regressed into a respectable .280 average. Nonetheless, it gave everybody carte blanche to speculate wildly about his performance. Now comes Paul Daugherty, in a presumed retort to Hal McCoy, explaining that April is the perfect time to panic. Why? Well, probably because he makes a living (until he takes early retirement from Gannett) writing articles based solely off of hyperbolic panic. PROVOCATIVE! 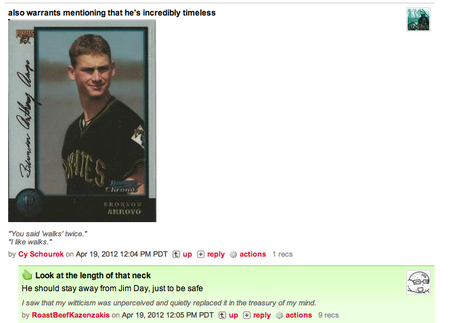 Saturday: "No, Mr. Rose, You Cannot Deduct Those Hideous Outfits as a Business Expense"

If you’re like the staff here at RIWIAW, you filed your taxes months ago (we needed the refund checks BAAAAAAD). If you’re like baseball’s Hit King, however, you last filed your taxes years ago. Evidently, even after making a payment of over $970,000, Pete Rose still owes about $120,000 on tax liens stemming from 2009 and 2010. In more simpler terms for Pete, that’s about 2,000 more autographs he has to sell to make him square with the IRS.