Share All sharing options for: Who? - The 2012 Dayton Dragons Preview

First up, the Dayton Dragons. One of the most beloved minor league affiliates, Dayton is where many Reds fans get their first look at prospects coming up through the system. This is the first place that prospects play in front of Reds fans, and usually feature some of the largest crowds some players have ever played for up to this point.

That being said, there's a lot of "who?" on this year's roster. The household names of Hamilton, Lutz, and Corcino are gone, but this year will mostly be carryovers from a Billings team who despite not winning either the first or second half division title, ended up with the best overall record in their division at the end of the year.

So who IS going to be on this team? Find out after the jump. 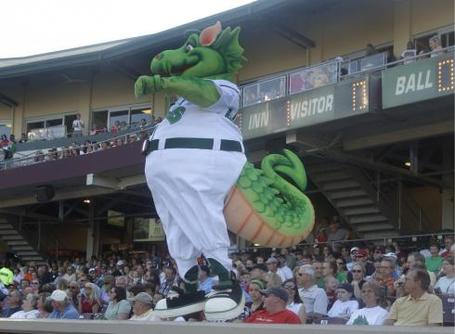 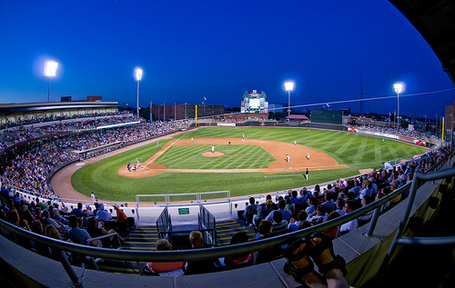 The Dragons play at Fifth Third Field, and as many know, currently hold the consecutive sellout record for a professional sports team at 844. They've never not had a sold out game in 12 years of existence, and look to continue that this season. Not only that, their stadium holds 7,230 fans, which is over 1,000 more fans than their league average (and they're the only team that sells out all of their games). I had the pleasure of attending a game there last season and had a great experience, and hope that all of you make the trip up sometime this year too. You won't be disappointed.

This isn't the same star-studded pitching staff that we saw last year, but then again neither was last year's in April, so there are a few of these guys that could break out in a big way. Justice French strikes me as a good candidate to do that, as the 25th rounder out of Mercer had a 55/6 strikeout to walk ratio in the AZL last season. A couple of familiar names with Gerson and Robles returning to Dayton, and our very own Car-Go and Quezada will likely fill out the rotation. Kyle McMyne started last year, but will likely move to the bullpen (and I think he'll close). Dan Jensen should be the bullpen name that people know (as he's the local boy and a UC product), but keep an eye on James Allen. Allen was the 7th round pick last year out of Kansas State, and put up a 1.26 ERA in Billings last year.

The lineup is full of upside, in my mind, led by last year's 6th round pick Sean Buckley. His .923 OPS in his first year will go very nicely with Ryan Wright's 887 OPS, and there's a lot of upside in young OF Kyle Waldrop, who will be the second youngest player on the team. The youngest will be Junior Arias, who didn't hit a ton last year, but should see a lot of time at SS and 3B. Nick O'Shea will provide some power in the lineup, and will likely get a look at catcher aside from his 1B duties.

The bench will get a spark from former Mets 12th rounder James Ewing, and it wouldn't surprise me to see '09 8th rounder Juan Silva get a lot of starts in the OF. Steven Selsky gets a much deserved boost as well, as he hit .311/.413/.585 in rookie ball last season (after going in the 33rd round in the draft).

Overall, this is a team lacking a superstar on the surface, but they still have a lot of promising pieces that could develop into big leaguers. I think one thing to watch here will be when the team starts to move players in and out during the summer, because I think that's when we might see a guy like Robert Stephenson join the team if all goes well in rookie camp.