It’s hard to bring the whimsy when your team is playing terribly (after all, we hate sounding like cynics). Fortunately, we here at RIWIAW are capable at looking at the big picture and avoiding panic (we generally don’t panic until it is too late).Therefore, instead of kicking our boys while they’re down, we’ll instead poke at the panicking individuals who believe that this team is going to maintain hitting .191 for the rest of the season.

"Fire Dusty!" "Set Fire to Dusty!" "Anemic offense" "Below .500" Sound familiar? These words not only describe the 2012 Reds, but also the 2010 Reds exactly two years ago today! That turned out terribly for them, right? No? Well, I guess we should have a little perspective before we start calling for designating two first round picks for assignment, right?

If you were wondering why ESPN keeps Leatherpants on payroll, it isn’t because he likes to double date with Steve Phillips, but rather because he still has several major league GM offices bugged (the Reds have the WORST cleaning crew). This is probably how Leatherpans was able to break the news of Brandon Phillips signing a six-year deal with the Reds. In all honesty, there are a few things more embarrassing than getting scooped by Jim Bowden, that those instances almost always involve hiring Leatherpants in the first place. In the future, if Walt doesn’t want this to happen again, he really needs to replace that leg-lamp that "really ties the room together."

Tuesday: Comment of the Week! If Dallas Latos played Marry, Boff or Kill with 3 of our mods: 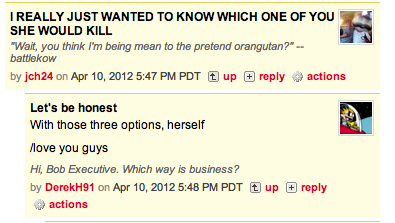 Wednesday: Marge and In Charge

For some reason or another, we here at RIWIAW are still signed up for Google Alerts concerning Marge Schott. Aw, whom are we kidding? We know exactly why we signed up for it: she was both a lighting rod for debate (READ: PAGE CLICKS) and a great source for an easy punchline. Imagine our shock when her name began reappearing in stories relating to Ozzie Guillen’s recent comments. Folks, let us set the record straight by saying this is a false equivalency. Marge Schott never used homophobic slurs against reporters. Marge also never tried to praise a ruthless dictator. Also, Marge had a dog! If Ozzie is going to continue saying dumb things, he needs to realize that he needs to age about 40 years so everyone can equate his ignorance with charm.

We give Jim Day a lot of (deserved) grief here at RIWIAW. After all, it’s not every day we’re called out as "tools" by individuals outside of our nuclear family. That being said, we applaud Jim for improving his game as a shill for the regional tourism chamber. In order to avoid the controversy surrounding last season’s unfortunate trip to the Cincinnati Zoo, Jim Day is now visiting exhibits of places already destroyed. Let’s all take 1:38 to watch how Jim gleefully describes how thousands of innocent men, women, and children met their demise through asphyxiation and cadaveric spasms. Fun for the whole family!

What does Brandon Phillips attribute to winning a Silver Slugger award and a Gold Glove? Tweeting about Lunchables, evidently. Today on the Jim Rome Show, Dat Dude claimed that using Twitter inspired him to be more productive in 2011 because of the interaction with both fans and haters (and, fan-haters like ourselves here at RIWIAW). With this in mind, we hereby invite Drew Stubbs, Homer Bailey, Alfredo Simon, Ryan Ludwick, and Willie Harris to comment here at Red Reporter. Within a few months, we'll turn all of them into All-Star caliber players.

Saturday: In An Attempt to Say "We Aren’t The Only Ones!"

We submit this article by Al Yellon (Un-ironically! I know, right?) questioning why offense is down, league-wide, season. While it may demonstrate a trend, we sadly must still realize that not all teams are 4-6 because of their anemic offenses. But hey, that’s okay because the Reds are going to hit their way out of this funk, not walk it out!

"We're going to hit our way out of this slump, not walk out of it" - Dusty Baker postgame