Edwin Jackson. The Reds look absolutely anemic right now, but I guess you have to give credit to Jackson, too. He retired 16 Reds in a row at one point, between Drew Stubbs' run-scoring single in the 2nd and Chris Heisey's four-pitch walk in the 8th. Miguel Cairo's two-bagger in the 2nd was the Reds' only XBH, and it wasn't even hit that hard (he squeezed it down the leftfield line). Overall, Jackson threw a complete game two-hitter, walking one and striking out nine.

The Reds drew first blood in the 2nd, as Miguel Cairo doubled and Drew Stubbs drove him in on a single. That was it. That was everything. They did absolutely nothing else against Edwin Jackson the rest of the day.

The Nationals tied it up in the bottom half of the frame after Homer Bailey issued walks to Adam LaRoche and Xavier Nady. Jesus Flores then knocked LaRoche in on a single to LF.

The Nats got two more in the 3rd as LaRoche doubled to drive in Danny Espinosa and Ryan Zimmerman.

Homer would settle down after that, but it didn't matter. I suppose you have to give credit to Edwin Jackson for throwing a good game, but honestly I don't think the Reds offense could muster a half-dozen hits against the pitching machine right now.

A Jayson Werth douyble in the 7th notched another mark on the chalk board. 4-1 Nationals. 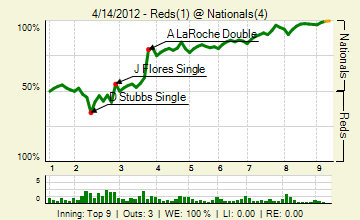 Miguel Cairo came up lame after scoring in the 2nd inning. He's likely going to take Brandon Phillips' spot on the not-DL since BP says he's ready to go now.

Jackson only needed 92 pitches to record his 27 outs.

Jesus Flores was 3-3 with a walk for the Nats, which means he tallied as many total bases as the entire Reds offense. Woof.

It's still early and everything so I'm not worried yet, but dang. These kinda games can drive a man to drinkin'.