Bronson Arroyo was good. In fact, he was as Goodroyo as we'd seen in almost a year and a half.

Rather than let him go farther than 91 pitches (while the bullpen was gassed), Dusty Baker opted to play match-ups with the game on the line, and it cost the Reds a chance at a win in regulation. That sucks.

Bronson went 7.1 innings, yielding only 3 hits and a BB while striking out 4. That wasn't good enough to let him face Chad Tracy, however. Damnit. 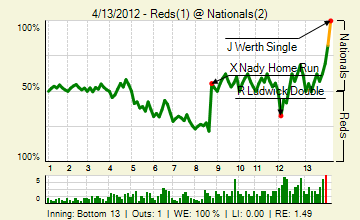