Dusty could have called Tina, Terry, or Paula. Instead, he called Simon (called him!). Reds lose, 3-2.

Share All sharing options for: Dusty could have called Tina, Terry, or Paula. Instead, he called Simon (called him!). Reds lose, 3-2.

I watched the whole game, I'm pretty sure I didn't miss a single at bat by the Reds, and I just stared at the Box Score for about five minutes. On a day where no one really stood out as a player to be reckoned with, I figured it might be time to let you fine Red Reporters decide who you think deserves the JNMHSotG.

Ryan Ludwick was technically 1 for 4 with a 2 RBI single in the top of the 9th to send the game into extra innings, but had the official scorer been paying attention, he likely should have given an error to Ryan Zimmerman; that said, Ludwick didn't strike out after having Bruce IBB'd in front of him, so there's that.

Jose Arredondo came on to pitch more than one inning for the second day in a row, and though he gave up 3 hits over 2 innings, he induced a huge 1-2-3 double play to end the Nationals' scoring threat in the bottom of the 9th.

That's pretty much it. Rock the Vote, RR! 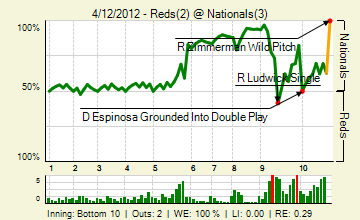