Francisco for Hoover: Kinda sounds like an FBI fan-fic

Juan Francisco, known in these parts as El Niño Destructor (END), generated plenty of discussion over his 5+ years in the Reds' organization. His divisiveness as a prospect may have been out of proportion with his recent contributions, but a free-swinging slugger tends to angry up the blood. 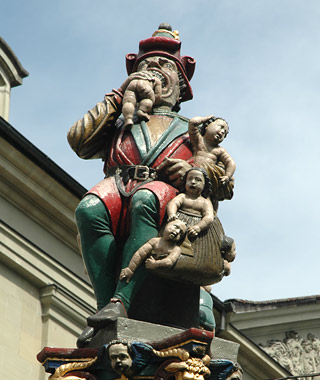 We'll always have this horrifying statue to remember you by.

It's not hard to see why the ambiguity existed with Francisco. E.N.D. lives at the extremes, with his shortcomings undercutting his talents - and vice versa. He hit a home run OUT of Great American Ballpark, while still being identified as a "scrub" by the casual (mean-spirited) observer. He pretty clearly has a great arm, but his ability to field third base has always been in question. He's raw strength with the bat - or when pulled off the bag at third - makes him an exciting player to watch, even as his physique seemed to push the limits of a non-1B position player.

It might be that last thing that caused the shine finally to come off for the Reds. He's been in the doghouse all spring, but his saving grace has been that he's out of options and left-handed. At the end of last season, he also appeared to be Dusty's favored back-up for Rolen. But that all changed this March.

The Reds' frustrations may have come to a head along with the realization that Francisco, without options, was an inconvenience on the active roster roster, alongside an increasing demand for pitching depth.

Hoover was a 10th round pick by the Braves in the 2008 draft. He saw some time in the bullpen at AA and AAA last season, so he's at something of a cross-roads in the starter-reliever divide. John Sickels gave him a "borderline B" and ranked him #7 in the Braves system entering 2011, saying:

He's been a favorite of mine for three years. I think he would be a very good number three/four starter, but they seem to prefer him in the bullpen.

Depending on who you listen to, Hoover is either destined for the middle-of-the-rotation or a set-up role in the bullpen. His upside might be a notch or two above Sam LeCure, but a realistic projection might be right in line with Yosemite Sam - a capable spot starter, with potential to be an innings-eater in the pen and grow into a set-up role. That's certainly valuable for the Reds, especially with a major gap in upper-minors/close-to-MLB-ready pitching talent.

As a starter, he fills the Reds' desperate need for depth. However, he only has 18 innings above AA. He may not be more useful than Francisco for at least the first half of 2012, considering the Reds need a lefty. but his upside could come in handy down the stretch.

The Reds might still need another reliever, unless they think Hoover gives them the flexibility to do something like put Francis in the bullpen. Another trade is definitely a possibility.