Share All sharing options for: 2012 Reds Depth Charts: Third base

One thing to remember as we complete our trip around the horn with this Depth Chart series: Miguel Cairo may need to be more than one person this season. He's the one constant across these lists (and in our lives).

The third base position, on the other hand, had its issues with constancy last season. I'm sure there's a really funny thing to say about Scott Rolen, old age and regularity, but I'm going to leave that there. We haven't the time.

Despite appearing in only 65 games in 2011, ending his season on July 20th with DL stint that led to shoulder surgery, Rolen seems healthy enough in the early-going in Spring Training. The bar for Rolen's expected playing time has gotten progressively lower since 2009; it''s currently set to "third base coach."

But however big the "if," I think it's reasonable to say that a healthy Rolen still gives the Reds the best defense and on-base skills this season - which is probably just shorthand for being the Red's third base option. If you believe some of the spring platitudes, Rolen also has more range of motion in his shoulder than he's had in four or five years.

Like Rose, Ripken and other aging greats, he's had to modify his batting stance as his career wore on (while in Toronto). He could do so again to minimize stress on his shoulder, which could erase any power he might have left over from 2010, though I don't see any difference between this (pre-surgery) and this (from this month): 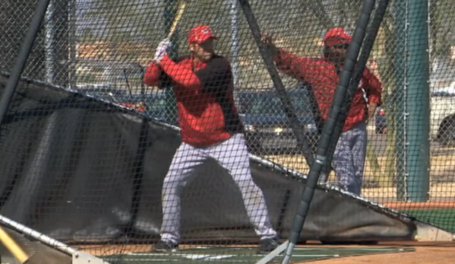 I struggled with putting Todd Frazier fourth on this list when there's still a good argument for him to be Rolen's replacement, but I think the three players above him are likely to see more time at the position this season - which is how I've organized these.

I think I said everything above, which was mostly recycled from this. Just be well, man.

Francisco may be in the doghouse for not properly rehabbing in the offseason and coming into camp overweight, but he's well enough to play in the field. Based on how he was used last season, no one else has a better claim to being Rolen's caddy. Being out of options seals it for him.

Cairo figures to get starts and pinch-hit appearances against righties, so he might actually see as much time as E.N.D spelling Rolen, depending on needs elsewhere.

He can hold down the position a little better than SS, but alaika is an emergency option here.

H-Rod is too low in the org chart to be a factor in 2012, but along with Vidal he's the only other player than Francisco with possible future as Rolen's heir.