"I learned from Billy Goodman, my first minor league manager. 'Begin every year pretending it's your first year. If you had a good year, prove it was no fluke; a bad year, pretend it was a fluke." -- Joe Morgan, Baseball Digest (May 1980)

Mickey Mantle and White Ford were watching from the dugout in spring training when a very young Pete Rose sprinted to first, a la Enos Slaughter, after a walk. "Hey," Ford yelled. "Look at Charlie Hustle." -- Parallel Hitters, Jim Lebuffe

Come on in here. You can leave your boots by the door. Let's get you a moist towelette and a hot chocolate. Drugs? I think I'm fresh out, but here's some spring training. Why not get hooked on a different kind of speedball this year?

Depending on where you've been since October, this was a pretty mild winter. But February is a still a grey, slow-moving month - despite being the shortest on the calendar (even in a leap year). Exhibition or not, spring baseball can't come soon enough

For the Cactus League opener, we get a Dress Rehearsal lineup that is strikingly similar to what we can probably expect on Opening Day. We purged ourselves of some bad air over Ludwick hitting cleanup already. Like Dusty grumpily suggested, this lineup doesn't have to mean anything, even though it does fit his MO pretty well: SS hitting second, catcher hitting 8th, left-right-left Konami Code combo.

It's been said many times, but lineups also don't really matter provided they're halfway sane (pitcher hittting 8th or 9th, etc.) Cozart probably shouldn't start off hitting in front of Votto and Bruce should be getting more PAs than Ludwick (aside not treated like a garden variety lefty), but let's not lose sight of the simple fact that baseball is back. Just like the players are going to be a little ginger at the start of March, we too can ease into the indignation.

Mike Leake will pitch first, going for about 2 innings. We're supposed to be worried about Mikey because he was flagged by the Verducci Effect, but aside from the Verducci Effect being far from empirical, it's hard to be too worried about a low-impact pitcher who held up pretty well down the stretch last season. I think the main concern for Leake, as a slighter-built pitcher without overwhelming stuff, is simply whether he can sustain his success as a crafty #3 starter type - not whether hes going to suddenly break down completely.

Even though the position players and starting rotation are all but set, there are plenty of little storylines that will play out over the next month. One of them involves former prized Yankee prospect and All Star Dioner Navarro. He gets the start today at DH, which might say something (or probably nothing) about Dusty's desire to weigh his options at catcher. Mesoraco should have a spot secured - with the possibility of more than 50% playing time - but there are also injuries to consider. The Reds had a rash of them late in camp last season. The main thing here is to appease the desert spirits and keep applying that injury prevention balm. 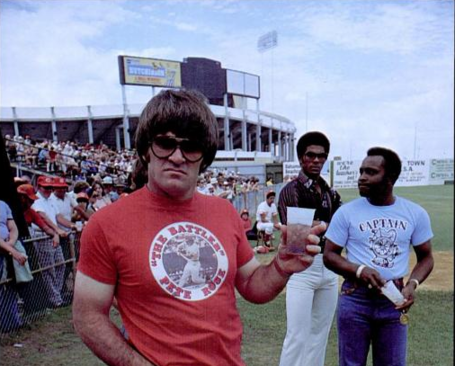 (Lineups after the jump)

Last season, I can remember apologizing for poor pitching performances in Spring Training on the Arizona air, small sample sizes and the flawed social construct of Spring Training itself. They ended up being more predictive than we hoped. Spring Training stats aren't completely out of sync with regular season performance, but there are so many red herring performances (like Hermida and Sappelt last season) that make them essentially meaningless in deciding the position battles that matter.