Aroldis Chapman: Starting to relieve or relieved that he's starting?

Share All sharing options for: Aroldis Chapman: Starting to relieve or relieved that he's starting?

A serial look at the starting pitching. Part I: Aroldis Chapman.

I still don't know what the Reds' plan is with Aroldis Chapman in the long-term (in fairness, I haven't asked them) and I only have a foggy idea about their plan for him come Opening Day. It seems scarcely more clear now than it was after he was brought up to relieve in late-2010. He's been on the starter track all spring, but that's also a fraternity that allows you to pitch against Billy Crystal.

Judging by Dusty Baker's comments, to Jim Bowden and others, he'd like to get Chapman on the big-league roster. That probably means bullpen. Jocketty might think different, but he's also recently gone on record with the Rockies broadcast team and speculated about making him the closer.

All of this to say, it's still one of life's enduring mysteries.

Chapman has said through an interpreter that he's been focusing on command and control this spring - not velocity. Though we don't have a reliable record, I'd guess he's not topping out at 105 right now. The latest reports say he's sitting mid-90s and topping out in the upper 90s. The dip in velocity might explain some of his hittability earlier in the spring. Our RR correspondents saw him against the Padres. The gun read 98, but Chapman was more than speed-freaking - showing a repeatable delivery and improved command.

He threw strictly fastballs and sliders in his spring debut, but has mixed in at least one other pitch since then. While there could be some strategic reasons to keep his changeup under wraps, I'd guess that he's not yet entirely comfortable with using it as frequent as the rigors of major league starting demand.

Chapman's spring has pointed to significant improvement. But it may not be enough improvement for the Reds to use him as a starter in a season when their chips are already in the middle of the table.

Arguably as important as getting his walk rate down to a number that won't be immediately laughed at is Chapman developing a useful 3rd pitch. Pitch F/X data thinks Chapman has thrown around 45 changeups in the big leagues, though some of those may be misidentified fastballs.

Pitchers can have success with a straight change-up without much movement, but it needs to look as much like a fastball coming out of the hand as possible. The problem has not so much been that Chapman's release point hasn't matched his changeup, it's that he hasn't had a consistent release point for his fastball in the first place. That makes it more difficult to sync the two pitches up and to command either pitch with a repetitive delivery.

I think it's a pitch he needs to have in order to make multiple trips through a lineup, facing a majority of righties. With a little movement away, a changeup could be a powerful pitch against a right-handed hitter - who can get around on his fastball and slider easier. And, in fact, he's thrown it almost strictly to righties, but his 41.9% strike rate is further evidence he isn't doing it right.

There should be no reservations about his fastball and slider being dominating, if he can control them. It's a big if, but command is the question mark hovering over many promising power pitchers.

Unsurprisingly, his fastball is the go-to pitch when he's behind in the count. He's thrown it almost exclusively when there are no strikes (including 0-0 counts), while he goes to his slider with highest frequency in 0-1, 1-2 and 0-2 counts. He throws the fastball when he needs a strike and it's the pitch he controls best, but his routine can be very predictable. Commanding his slider and adding a changeup, while getting comfortable throwing them a little more often in hitter's counts, would keep his opponents off-balance and less likely to sit on the fastball.

His slider is a devastating pitch when it works, but it often breaks too much and/or doesn't slide over enough. He could be jamming righties with the pitch, but righties might also have a better read on the slider and be able to kill it when it doesn't break like it should. So far, it's been all over the map:

There are few, if any, meaningful comps for Chapman. That was part of the allure when the Reds' signed him. While I think teams sometimes overpay for mystique in the foreign market, we should still excited about the rarity of a 6'4" lefty who throws 100 and is still 24.

It's a gross oversimplification, but if we take his handedness, height, relative youth and ability to miss bats as predictive, the universe of similar players opens up a little. Since 1950, I found 25 lefties who missed bats (9.0 K/9) and were tall enough (6'1" an above). I hedged my bets on the reliever-starter question with a 60 IP minimum.

it's a short list, but I think it's instructive. Randy Johnson is not on it, simply because he didn't crest 9 K/9 until his Age 27 season. I think Chapman has more potential to miss bats than Johnson at the same age, but maybe I'm overrating AC's power as a starter. 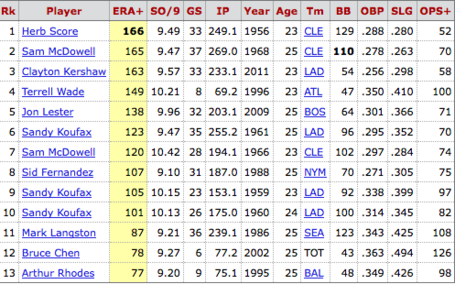 But what if you also walk a lot of batters? It's a tiny sample, but only 2 of 7 lefties (aged 23-24) with a K rate over 9.0 AND a walk rate of 5.0/9IP were below the rough league average in ERA+. Sandy Koufax is the only starter who fits this mold.

Which brings us back to how incomparable Chapman is. It's possible to pitch from the left side to a majority of right-handed hitters and make up for walking a lot of batters with heat. But you might also have to be Sandy Koufax to do it.

With two spots open in the bullpen (and two on the 40-man now), it's anyone's guess what happens before Opening Day. But with two late-innings guys gone in a season where the Reds are pressing to win, it's hard to see them resisting the urge to install Chapman as a fireman. Still, it's no guarantee he'll stay there all year, even after Masset is back and they have some more reinforcements. Let's say 100 IP is his absolute ceiling.

With those expectations, I'd take him to be a low-3.00 ERA reliever, and a high-3.00/low-4.00 ERA with a string of spot starts. Just two fewer walks per nine innings could make a huge difference. Low-3.00-to-high-3.00 is about the range of his projections and it seems to measure up with both his comps and my gut. Whatever "Steamer" is (possibly NSFW), they're by far the most optimistic, with a 3.14 ERA and 10 spot starts.

Steam on, you crazy diamond.