Share All sharing options for: Screeching to a Halt! Brandon Phillips and Scott Rolen: Nightmare Forecasting

Last week we fantasized about the best case scenarios for two of the Reds young(ish) outfielders. In an attempt to be "fair and balanced," we will now hit the brakes on the unrealistic optimism. The "worst case scenario" projections for Scott Rolen and Brandon Phillips are truly nightmarish. The bottom 10 percentile projections at Baseball Prospectus paint an ugly picture.

Given Rolen’s injury history and age, his worst-case projection is, unfortunately, feasible. After all, the AVG/OBP/SLG are similar to his actual line in 2011. However, if Rolen can stay even remotely healthy we should expect something like .260/.330/.420 from the Coldplay-loving third baseman.

The bottom 10 percentile projection for Phillips surprised me. Surely it wouldn’t be a shock to see him regress from his 2011, career-best numbers. But a 120-point drop in OPS? At 30 years old? Brandon could tweet from the batter’s box and still outperform this projection.

The possibility of a severe drop-off from these players shouldn’t be ignored. The wise folks at Baseball Prospectus indicate that there’s a chance, albeit remote, that half of the Reds infield will be well below-average at the plate this year. If either player performs so poorly this year, the Reds will be lucky to win 80 games.

You may wake up now. It was only a nightmare. 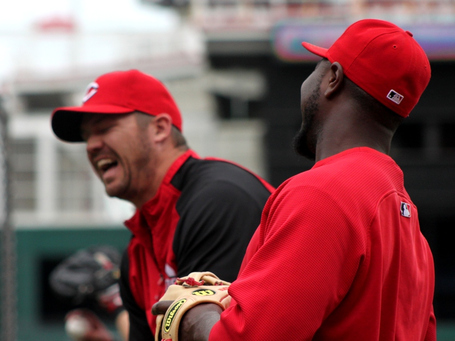