To the Max! Drew Stubbs and Chris Heisey Dream Forecasting

Share All sharing options for: To the Max! Drew Stubbs and Chris Heisey Dream Forecasting 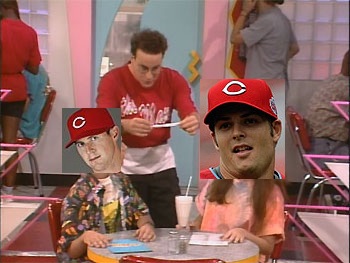 If you're younger than Scott Rolen, yet older than Billy Hamilton, you probably spent a significant portion of your youth watching "Saved by the Bell." On the show, the gang’s favorite hangout was a restaurant called "The Max." At The Max, even Screech could dream of one day reaching his full potential to marry the love of his life, Lisa Turtle.

Following that lead, let’s take a moment to dream about a couple of our beloved Reds. Here, will outline best case scenarios, "to the max" 2012 projections for Drew Stubbs and Chris Heisey.

The forecasting system at Baseball Prospectus provides several projections for each player. The 90 percentile projection represents their view of the best case scenario for that player. Based on their projections, this is the absolute best we can hope for from Drew Stubbs in 2012.

As for Chris Heisey…

The likelihood of either player reaching these numbers? About the same as Lisa Turtle accepting a marriage proposal from Screech Powers. But hey, we can dream, can’t we?