Saturday: Ever Wanted To Know Who is Starting at Third Base in AAA For The Reds?

Why does SBNation exist? Well, when some entities are posting antiquated lists of the Reds’ top prospects, and other entities are reporting on other’s postings of said antiquated lists, we give you #OriginalContent! (Editor’s note: EVEN ON SATURDAYS NOW, HOORAY!) Today’s entrée? A comprehensive organizational chart of the Reds system for your stalking viewing pleasure. Is Paul Janish becoming too old for your unrequited love? Well, then we recommend Cody Puckett who is still in tender years as far as middle infielders are concerned. Afraid Scott Rolen is going into the wood chipper by the end of the season? There’s always a David Vidal lurking around the corner.

For all its other benefits, Twitter is not a good source of knowledge or gauging public perception (at press time, the following phrases are trending: "RIP BIEBER," "RIP Adele," "RIP EDDIE MuRPhY," and something called "bisping"). Thus, using Twitter as your sole sample size to figure what we’re all worried about isn’t going to yield fresh fruit (or else "OMG MAYANS" would perennially trend, #moddangit). This, however, doesn’t stop John Fay from telling everybody to, quite literally, take a chill pill in his Sunday column this week. Unfortunately, what Fay doesn’t know is that the people who constantly ask him the same questions aren’t the ones who read his column (or meaningfully contribute to society) . . . they’re too busy asking Jay Bruce for a retweet.

The crack staffers here at RIWIAW are a bit biased towards Todd Frazier. Frankly, it’s because he is such a classyguy, the fact he helped defeat the Japanese in the Pacific Theater Williamsport, Pennsylvania, and that he can play a bunch of positions. This is why it pains us to see him be so chipper about the possibility of competing at Spring Training for a big league spot. Deep down, while we know he’s the better (AND DREAMIER) player, Juan Francisco has less options and will the preferred choice among baby eaters management.

Tuesday: Yell On, My Wayward Son

Describing Al Yellon’s midweek ramblings to an unknowing bystander is difficult: "It’s like the Onion, but about the Cubs, and not funny." "It’s like Skip Bayless’ show, only about the Cubs, and it tries to be funny." "It stinks!" We’d be perfectly content with ignoring his column but for the fact that it pops up on our sidebars CONSTANTLY on Red Reporter. We here at RIWIAW haven’t been this bombarded with mediocrity over the internet since we googled "Maxim" once and went three weeks without seeing targeted advertising outside of the aforementioned magazine. Thanks a lot, internet cookies!

When looking for hard-hitting investigative journalism concerning players in Cincinnati and their possible interest in playing for a team in Ontario, Canada, we here at RIWIAW look towards the Chicago Tribune. It appears John Fay follows our lead on this by riffing off of Phil Rogers’ piece in the Tribune. In today’s installment of "The Sky Is Falling in 2013," we’re told that Joey Votto going to the Toronto Blue Jays is an inevitable acquisition. Rogers’ rationale? Because he’s Canadian . . . or dead. One of those things. Rogers is not very good at his job.

Thursday: Comments of the Week, Both Home and Abroad! 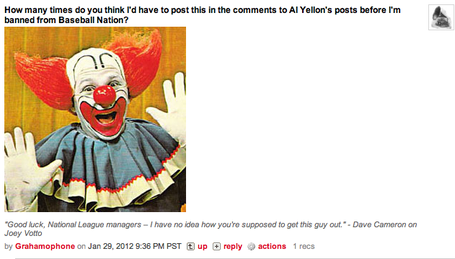 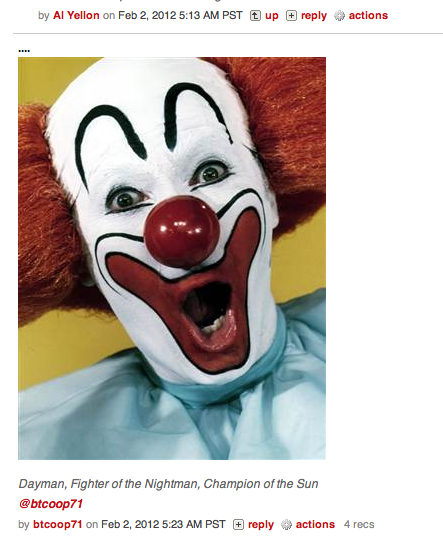 Friday: Mayor Mark Mallory Soon To No Longer Be The Greatest Political Embarrassment In The History of Great American Ballpark

Did you ever go to Great American Ballpark and find yourself sitting near some annoying guy who constantly complained about everything, refused to acknowledge the accomplishment of others, and made ad hominem attacks towards bystanders just for the benefit and enjoyment of his close friends and followers? Then you’ve been to an RR Meetup. If you enjoyed this, you’re in luck! The Reds are trying to showcase these types of folks by hosting one of those Presidential Debates everyone on Twitter seems to make fun of! We here at RIWIAW are hoping the Republican nomination is sewn up by the end of this month so Mr. Castellini will have to invite these individuals to debate.