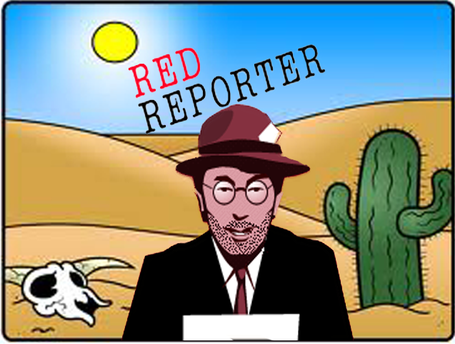 Major thanks go to Ronnie (aka Big Red Repemption: blog | twitter) for his brilliant design work and knowledge of cattle skull osteopathy. I made some kind of glib remark on Twitter about having a Red Reporter badge for spring training and BRR stepped up and knocked this out of the park. He's officially bumped up to Reporter, First Class and the "Crushed Velvet Crimson" level on the donor list plaques.

As we had for the holiday season, we now have a special edition logo for the Reds spring training residency in Arizona, which somewhat officially begins Sunday (Feb. 19). The above will appear as the site badge from whenever the design change goes through until Opening Day. I think you'll agree this logo rules - which is fitting because so does this site and so do the Reds. And so does, as I just found out, this marmalade I bought. It's going to be a great weekend.

Let me also politely ask that you get your phallic symbol and "bone" innuendo comments out of the way before March.