2012 Community Prospect Rankings: Chris Manno is 21st on the list 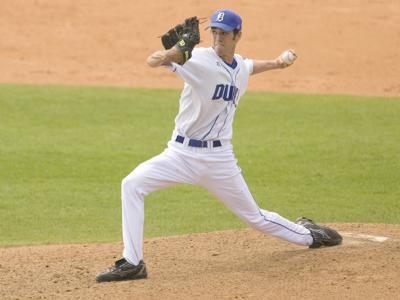 Who? The guy we got for Jonny Gomes, that's who! He was seriously lights out in Bakersfield last year. Right now, he's basically what Boxberger was but doesn't throw as hard. I'll be interested to see how he does as Pensacola's closer.

Same choices as yesterday, vote away.

Pros: Toolsy. Will be a monster at the plate if he can get his mechanics together and figures out how to hit. Time is on his side.
Cons: Still really raw. Went up a rookie ball level and numbers didn't improve. Does not walk.

Pros: Showed a ton of power potential, hitting 14 HR in 225 AB. Good bloodlines.
Cons: Struck out a lot, needs to curtail that. Doesn't have a track record for hitting for average in college.

Pros: Dayton's shutdown closer in 2011. Throws 3 pitches with good velocity on his fast ball (91-94).
Cons: Needs to improve command with his fastball and secondary pitches.

Pros: Showed good power potential. Should advance fast through the system. Versatile in the field.
Cons: Could walk more. Attended a school that jch likes.