We here at RIWIAW have been permanently banned from company events involving fantasy transactions ever since we traded Buster Posey for a few Hudy Ambers during last year’s roto league and benched all our other starters to release ourselves from a deal with those loan sharks in the sales department. So, while we have to pay our penance (which is better than repaying a 13% compounded interest rate), some of the other Red Reporters saw what it would be like if the Reds had money and decided to talk to people during the Winter Meetings. Their biggest move? Trading away Brandon Phillips for some AA talent. Because, after all, World Series are won on the backs of those mired in the rotations of the Pensacola Blue Wahoos. Frankly, if we here at RIWIAW were consulted on the moves, we would have suggested trading Joey Votto for Every Day Should Be Saturday’s pageclicks.

Ever since Harvey Updike poisoned the trees in Toomer's Corner, athletic rivalries have gotten out of hand. They likely reached a breaking point this week in the somewhat-unlikely rivalry of the Cubs and the Brewers during a quail hunt in Arizona. It was there where former Brewer Robin Yount, in cold blood, shot Cubs Manager Dale Sveum. Thankfully, Sveum avoided serious injury (his Cubs consistently avoided making solid contact all season) and the event appeared to be one giant misunderstanding between friends.Perhaps even more thankfully, this incident has been spared the wrath of being a proxy war for pro and anti-gun advocates (spoiler alert: you’re both annoying and will not change anyone's mind, ever).

"We don’t like counteroffer they proposed and since Chris Antonetti cut in the buffet line at the Opryland Resort, we’re going to leak stuff to Buster Olney to make him look dumb." Don’t forget to dust that dirt off your shoulder from Brian Cashman, Chris!

Have you ever walked out of a movie theater thinking "why did I spend $10 on THAT?" Well, now you have the opportunity to do the same by spending ten times as much money. Baseball’s Hit King and Human Zynga, Pete Rose, will be performing his one man show at US Bank Arena on Opening Day. The event is billed as an opportunity for Pete to tell "his story as only as he can" (read: charge a bunch of money for some ineloquent ramblings about the good ol’ days and how Johnny Bench is a jerkface). Be sure to get your tickets for "Pete and the Amazing Technicolor Reds Garb" early, before Pete buys up all the tickets in order to give you another 20% upcharge. 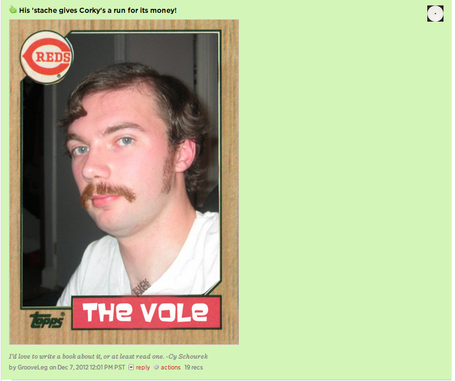 We applaud teams reaching out to their ever-growing Spanish speaking fan base as long as it doesn’t involve laughable Spanglish. That’s why we’re exited that the Reds will introduce “Los Rojos” jerseys next season as their intermittent home alternate. It’s good to know that in an ever-pluralistic society, the Reds have a radio sponsor who will likewise treat the Hispanic and Latin American communities with respect and dignity.

Did you miss possibly the last Redsfest involving affordable downtown parking? Have no fear because @JohnFayman has compiled this nice timeline of everything you missed. Well,