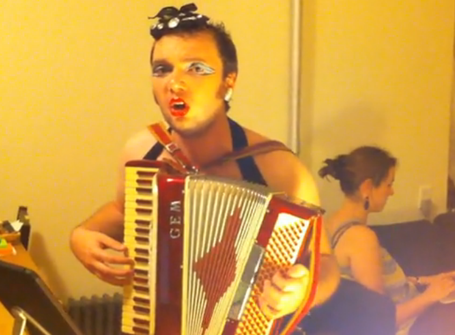 CINCINNATI - The Fake Reds are delighted to announce that they have purchased the contract of catcher Christopher Gamblee-Wallendjack from the Fake Long Island Ducks of the Fake Atlantic League. The contract is a one-day deal with an invite to spring training. Christopher hit .144/.380/.235 in limited action last season, but scouts love his upside.

"We love his upside", said one Reds scout.

The Fake Reds plan to move him to center field, where he will battle Drew Stubbs, Shin-Soo Choo, and Xavier Paul for fake playing time. There's no telling how that will shake out, but Fake Dusty Baker's reaction suggests that he may favor his new signing.

"He gets on base, right? I really like a cat who can take a pitch or two. I'm fake, this is all fake.", said Dusty Faker.

Fake Reds GM CharlestonWordsWithFriends weighed in with his take on his new short-term player.

"Wait a minute. I thought you said this was for Make-A-Wish? Please give back the per diem at the end of the day."

The most excited player about this deal seems to be Joey Votto, who nicknamed Christopher "The Vole" while in federal prison. They have never met.

"Who the hell is The Vole?", quipped Joey at an awestruck reporter.

He will wear #14, last worn by infielder Pete Rose Jr. Rose Jr. was unavailable for comment.