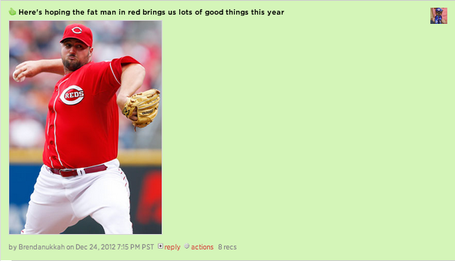 We here at RIWIAW love getting constructive criticism; particularly all the e-mails from folks telling us that if we’re going to be making fun of people on Grantland, we need to at least be as funny as Deadspin or provide some statistics to put us on par with Fangraphs (we still don’t know how to read those stupid things). However, as we are approaching our one year anniversary of providing you with (somewhat) weekly updates in a Sam-and-Diane on-again off-again style, we want to thank everyone who has taken the time to give us all the click-throughs we need to get our contracts re-upped. Strike-throughs and over-hyphenations for everyone!

As a professional sports writer, it must be hard to form an opinion. After all, that is the rationale given by T.J. Quinn as to why he will not be voting for the Baseball Hall of Fame (Editor's Note: RIWIAW's rationale? We're permanently banned for sending Greg Oden pics to the BWAAA President). For Quinn, it is too difficult to figure out how much weight, if any, should be given to steroid use. While we agree with Quinn that people like P-Doc probably should not determine who belongs in any Hall of Fame, under any circumstances, we think that going about it through nullification is probably not the best method when it gives folks like this guy a larger voice.

Thursday: The Closing of the Costanzo Doggie Door

It was around last year at this time that the Reds decided to go in the direction of retaining Joey Votto by packaging Yonder Alonso in return for starter Mat Latos. Today, the Reds took the final step in solidifying Joey Votto as their long-term first baseman by permitting Mike Costanzo to sign with the Nationals. During his time with the Reds, Costanzo had a strikeout-to-at-bat ratio of 1:2, besting even Arolids Chapman in that effort. Of course, the fact that Mike Costanzo is not a pitcher makes this statistic a rather dubious achievement.

Our "THAT’S RAYCESS" Desk here at RIWIAW has uncovered that the Atlanta Braves are returning their egregiously offensive "Screaming Savage" logo to their batting practice uniforms in 2013. While the Braves did exhibit good taste in choosing to not bring the logo back for last season’s throwback uniforms, evidently this exercise of discernment only shows up in Atlanta during leap years. Granted, there are some racists reporters in the Georgia media (SHOCK!) that have lobbied for the return of labeling Native Americans as "savages," but this really shouldn’t shock anyone. At all.

A lot has been written about the mentality needed to be a closer in Major League Baseball. Some pundits believe you need to be unaware of the reality surrounding your situation. Others believe the strength to close rests solely on adrenaline (Editor’s note: or coffee). Still, there are some who believe that the greatest evidence of a good closer is a record of dousing individuals with gasoline and chasing them with machetes. This is why, after six years in a Venenzuelan prison, Ugueth Urbina is attempting a major league comeback. If he makes it back to the show, Urbina’s threats of throwing gas are bound to intimidate hitters whether they are in a figurative or literal sense.

In his Holiday Interview with Reds.com, Same LeCure expressed his desire of coming up with a nickname for the current crop of Cincinnati Reds. While the Big Red Machine was great and all, he agrees that "New Red Machine" is probably not that original and should be placed on the side in lieu of something better. We want to hear your thoughts on what should the 2013 Reds go by (because we’re not that clever), so we can harass Reds and John Fay on Twitter with it in 2013. Have a great new year, folks!