It turns out that if you dump a quarter of a billion dollars of player payroll, you end up with some extra cash lying around. The true mark of a genius executive is determining what to do with that money once it's freed up. Now, overpaying for players with diminishing skills is one way to spend this money, but if you’re the Boston Red Sox, there’s no reason to recreate prior problems. Instead of investing money in a first baseman (or AA meetings for its pitching staff), the Boston Red Sox decided to donate money to Massachusetts motorists by comping them for tolls on a bridge in Brighton (sorry, Charlie from Southie). In a similar-move, the Miami Marlins have announced that they will also donate a portion of money saved from their recent fire sale to single-handedly bridge the current $3.4 billion dollar budget deficit currently facing the state of Florida.

Tuesday: Around the Mourn

We here at RIWIAW have been brainstorming ways to expand our brand. Our most recent iteration? A television show that is JUST LIKE Around the Horn, only with racisty-annoying commenters from websites. We’d like to use a laughtrack, but since today’s ultimate sports performance artist Colin Cowherd doesn’t use one, we’re not sure if we should either. It’s cool though, because at the very least it will allow folks to explain how this "MIKE LEAKE AS LEADOFF CENERFIELDER" meme started to propagate. So, while other people are dissecting the two logical arguments for and against Aroldis Chapman starting, we’ll show points of view involving whether or not he has a "starter mentality" and other dogwhistle stuff. This has Cable Ace Award Nominee written all over it. (H/T to –ManBearPig for pointing out these nuggets of trolling gold. If you see him at Hopnosis next week, be sure to give him something extra malty, you know, for the troll.)

The Reds’ history during the Winter Meetings is closely rivaling it’s storied tradition on Opening Day. While the Reds have had some very quiet Winter Meetings, others have been full of absurd leathery goodness. With the franchise’s unpredictable nature during this event in recent years, any and all prognostication is allowed if not encouraged.It is in this vein, that Charlie Scrabbles went ahead and put together this nice primer of possible moves for Cincinnati during the Winter Meetings. Even if any of his suggested moves do not come to fruition, it should give the casual fan the idea of which Reds they should target for autographs at Redsfest next weekend before they get traded. Oh, and if you see someone wearing this shirt while you're there, it's probably THIS GUY.

Hey, remember last week when we reported that David Freese crashed into a tree while being NOT DRUNK AT ALL? Welp, it looks like that may not have been the case. Oh, he definitely crashed into a tree, but now some folks near the scene of the accident are alleging that he may have been a bit saucy (or at least asleep at the wheel). Have no fear, though, because the crack staff at the St. Louis Post-Dispatch is on the case uncovering the whos, wheres and whys of Mr. Freese’s accident. Why are they trying to get to the bottom of it? Because angry baseball fans who comment on the sight jack up pageclicks, silly. 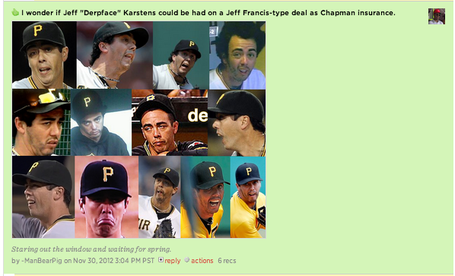 If you asked a random person on the street whether or not Scott Boras should be in the Baseball Hall of Fame, that person would probably say no (unless you coincidentally asked Jon Heyman). That being said, this first-ballot inductee of the Jerkwad Hall of Fame is the subject of a movement to get sports agents into Cooperstown (because, if you’re going to enshrine Ty Cobb, you can’t really say that character matters). Why would Boras make a good candidate? Well, because of his contributions to the game, such as negotiating the Barry Zito contract and being the principal agentin giving Chan Ho Park over $65 million. We here at RIWIAW understand that J.D. Drew’s $70 million contract isn’t why Fenway Franks are $7.50 in Boston, but we do want to say that just because someone makes a mark on the game, it doesn’t mean it is a positive one. Mark McGwire and Rafael Palmeiro also made marks on the game, but they’re probably not going to get busts anytime soon. Well, other than ones by the DEA. SICKBURN.

This is why Todd Coffey will never sign for a team in New York.