On this day in Reds history, Cincinnati traded away one of the most fantastically gifted players to ever wear the "wishbone C".

Share All sharing options for: TDIRH: "Eric the Red" sails to LA

On this day in 1962, the Reds traded second baseman Cookie Rojas to the Philadelphia Phillies for right-hander Jim Owens. The trade did not work out well for Cincinnati as Rojas was a fixture of the Phillies' middle infield for the next seven seasons while Owens lasted only a year in the Queen City.

On this day in 1977, former Red Willie "Ballgame" Bloomquist was born in Bremerton, WA. The utility player appeared in 11 games down the stretch for the 2010 NL Central champion Reds.

On this day in 1987, former Red Floyd Caves "Babe" Herman died in Glendale, CA. A fan favorite during his days in Brooklyn (1926-1931, 1945), the other Babe also spent nearly three full seasons in the Queen City. In Herman's first season in Cincinnati (1932), he led the league in triples with 19 while slashing .326/.389/.541 (151 OPS+) in 642 plate appearances. He would return to Cincinnati in 1935 after 26 games with Pittsburgh to start the season. Herman picked up where he left off putting up a line of .335/.396/.516 (147 OPS+) in his time with the Reds that season (386 PAs). He slipped in 1936 as his OPS fell by 106 points (122 OPS+) in his 422 plate appearances. Cincinnati sold him to Detroit in the spring of 1937. Herman appeared in only 17 games for the Tigers before retiring until a brief stint for the Dodgers during the war in 1945. Brooklyn's Babe drew some Hall of Fame support in the past, but his career was too short (6228 PAs) to really justify a long look. His career OPS+ is a very good 141, but that is simply not enough to make up for his short career. He was considered a poor defensive outfielder, though he rates only a bit below average by rField at Baseball-Reference. His career rField works out to -3.4 runs/150 games started, which is hardly atrocious.

On this day in 1991, the Reds traded centerfielder Eric Davis and righty reliever Kip Gross to the Los Angeles Dodgers for right-handed starter Tim Belcher and righty closer John Wetteland. Gross did not really do much before or after the trade. Davis, of course, was an MVP-type player while healthy, but struggled to stay on the field. He was generally unproductive in his season-plus at Chavez Ravine (the Dodgers traded Davis to Detroit in the middle of the 1993 season). Belcher ate 364.2 innings for the Reds across parts of two seasons before Cincinnati traded him to the White Sox during the 1993 season. The Reds flipped Wetteland to Montreal later in the 1991 season, so he never appeared in a game for Cincinnati.

I probably own less than one hundred baseball cards, but this Tim Belcher card from the 1993 Donruss set was in the first pack of cards my dad bought me. 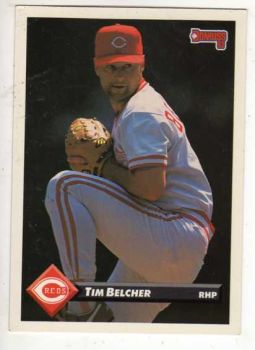 Cy Schourek got the answer last time, but he refused to accept a point. My clue was deemed to be too revealing.

1) Who won the 1953 AL MVP Award? By bWAR, this player's season is still the most valuable season at third base in the history of baseball.

2) Ted Kluszewski has the three most recent seasons of hitting 40 or more home runs and doing what else in the same season?