Do you remember this series? Probably not! But the time has come to finish it!

Share All sharing options for: The Best Names in Cincinnati Reds History, an Informal Primer (1990's)

When this series started, Joey Votto was in his third year of arbitration and the Reds hadn't been to the playoffs since 1995. This really ought to end, not because anybody cares anymore, but because like Bill Brasky's bar burning down in a parking lot, you finish what you start.

Remember that participation in the comments is absolutely vital. So, to continue with being snarky about parents naming their kids in the nescaline haze of the 1960s:

Carmelo Martinez: Surprisingly overlapped his career almost precisely with the only other Carmelo in baseball history: Monte Carmelo Castillo. Is, unfortunately, the third-most famous baseball player named after a candy.

Freddie Benavides: Quite the "kid who got picked last in gym class" name. Amazing, inspiring story that he made it all the way to not hitting a damn for two years in the major leagues.

Gino Minutelli: A shitty LOOGY from shitty DE. I imagine him standing on the rubber looking like Stan from Monkey Island:

Rick Wrona: The only one of eight Wronas to break into the bigs. Names are destiny, and Wrona would never be the wrapper Rawse is.

Geronimo Berroa: On the other hand, I'm surprised as you that this dude isn't a light-hitting middle infielder.

Jacob Brumfield: It's strange. When I first came to Red Reporter, I loved Jacob Brumfield more than any other Red. I was heartbroken that there was already a guy posing as Jacob Brumfield, so I had to go to my backup handle instead. In 1994, Jacob Brumfield was hitting everything in sight as a centerfielder. He's still the best Jacob (not Jake) in MLB history. And then, poof, traded to Pittsburgh and disappeared. He was a huge part of one summer growing up, when I raced to the sports section to tell my dad how Jacob Brumfield did last night. And now, I really don't care about him at all. I'm so spoiled by good baseball that I can't remember the fun of bad baseball.

Scott Bankhead: I imagine him like a villain from The Tick or something.

Larry Luebbers: SEE WHAT I MEAN?!?!

Roberto Kelly: It was an easy joke in my house that Roberto Kelly's parents just had some spacing issues, that their son was really Robert O'Kelly. These sort of jokes go over big in South Bend. It was sadly not until this morning that I realized his name is Roberto Conrado Kelly. My faith in his parents has skyrocketed.

Scott Service: The pride of Aiken High School and sadly the second-best batteryman named something like Scott Service in the 90s. I wonder if people ever called him Robert just to tease him.

Tim Fortugno: One of the rare famous Portuguese-Americans. He is only on this list as an excuse to talk about Peter Francisco, the Azorean orphan found on the Virginia City docks in 1765 who went on to be the baddest dude of the American Revolution. Among killing ten men at a time at Guilford Courthouse and picking up a half-ton cannon from the mud and walking it back to the American general at Cowpens, he had so many ridiculous exploits that this just makes it as a footnote: "he was said to have thrown two men, along with their horses, over a fence near his farm when they annoyed him."

Chuck McElroy: AKA the original Arthur Rhodes. No offense to Chuckie Scrab-Scrab, but Chuckie Mack-Mack was my original favorite. I still think he's a Blipster sent back in time, he even made a Cubs jersey look cool. His son, I think, is a Cardinals draftee.

Pete Schourek: On this list for obvious reasons, also because he fits our "Bronson Arroyo's K/9, dickonym" rule.

Deion Sanders: We're going to look back on two-sport athletes one day the way we think of decathletes.

Damon Berryhill: As a kid, I always thought of Damon's Ribs and Knott's Berry Farm when I heard his name. I was a fat kid.

Nigel Wilson: The only Nigel to make it into the majors. Why yes, he was Canadian. However, I have VERY SURPRISING news for you: 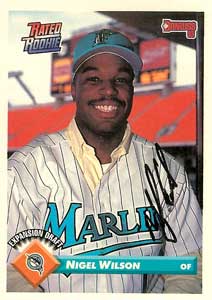 Pokey Reese: In a story I've said a bunch of times, Pokey Reese shares coverspace with Kenyon Martin on my 8th grade autobiography. Pokey and Kenyon share very few personal characteristics with me as it turns out. Much like Steve Gibralter, one could argue that I too was an overrated prospect.

Ozzie Timmons: Of the nine MLB Ozzies, five played in the 90s. Another two played in the fifties. What is especially funny, at least to me, is that now that I've given you Timmons, you could probably name the other four 1990s Ozzies.

Roberto Petagine: Oh Roberto! When I first came on to internet Reds fandom, everyone was howling at the moon over the loss of Roberto Petagine. I think Pops has some stories about him. Anyways, here he is wearing the late-nineties version of an Affliction tee: 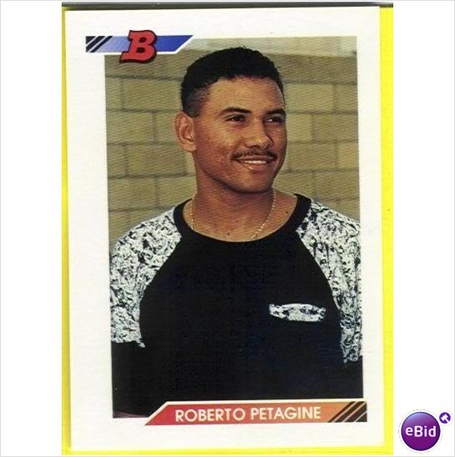 Ricardo Jordan: Played during the same era as Ricky Jordan. Athletic parents of the 1960s were simply not creative, I guess. There was also a time there when every athlete with the last name "Jordan" had to deal with comparisons to His Airness. That must've been a shitty time to have the last name "Jordan."

Gookie Dawkins: I never gave as much of a shit as everyone else did about the Gookster. I do remember the fun "Gookie to Pokey to Casey" DP combo. I don't remember much else. But we'd be remiss if we didn't put him on here.

Most Cincinnati Name: Actually a tough one here. Pete Schourek is the most German of these guys, but I'm more inclined to give this mantle to Pokey Reese, who has a great name for a Huggins-era point guard.

Most 1990's Name: Cecil Espy. You have the highest point of ESPN's enjoyableness (when you could actually watch highlights to build a narrative, not just to see big names) and the crest of the Cecil wave, before it just became an Old Dude Name. And of course he had a 90s moustache and a 90s gheri curl.

Best Name of the Decade: This is, admittedly, a tough one. I'm going to have to go with Chuck McElroy. There was something just very badass about the name that he totally didn't deserve. I want to make a Saturday morning cartoon about Chuck traveling the world with Mark McLemore in kilts and baseball-themed weapons (McLemore gets a bat, Chuck throws well-aimed baseballs) in order to save the planet from global warming and/or football. I think that would be a good show.