I've been struggling to summon the ill-will I need to reduce the Giants to a caricature of arch-villany in the lead-up to this series. San Francisco is a nice place and the Giants seem inoffensive, even likable.

Latos looks like a sandworm from the Beetlejuice cartoons, Cueto kicks people, Arroyo sings Matchbox 20 songs, and Bailey has a stupid name.

Admittedly, I asked him if he would please take some jabs at the Reds so I could write this post. But it's just the spark we need.

Now that we have some fighting words, it's time to escalate. This can only be achieved by resorting to childish personal attacks, grandstanding, and being annoying as hell.

Let's start with the ball park. AT&T? The American Telephone & Telegraph Company? The history of the company is really fascinating and essential to understanding the evolution of American commerce in the 20th Century, but who do you think you're fooling with the Telegraph? I guess maybe the last time the Giants won anything, the news went out by Morse code. That one doesn't really work at all, but it would be nice if it did.

I've been to AT&T Ball Park. Yea, real nice. It is really nice. It's a great place to see a game. Great to the point of almost being distracting and making me feel guilty. And I don't like feeling guilty. 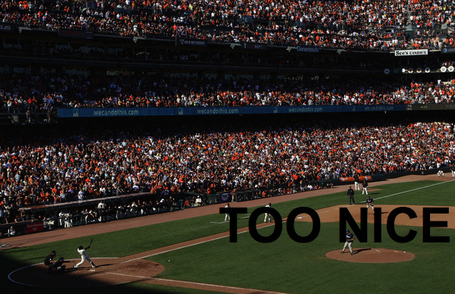 So you were too good to keep playing at Candlestick? Afraid the wind would blow away the IPO filing papers for your dot-com start-up? The Reds played in a stadium with a gaping hole in it and then it collapsed but we never complained. At least not about the implosion, because that was cool as hell. There's been a lot of other kinds of complaining.

And that Coke bottle in left field. I hope you like getting nailed by paternalistic soda taxes. There's also an ogre-sized mitt next to it, I notice. I think you'll agree our country has its hands full with grotesque Mitts already (Topical).

Moving on to Buster Posey. What the hell kind of name is that? Did Parker Posey and Buster Olney have a child and it took Parker Posey's last name for whatever reason? That's pretty cool, if true. That kid would be a cool kid. Probably would be hip, but also know a lot about baseball. Would be an attractive young man. Which Buster Posey is, by and large.

Also, you seem to have a homeless Cossack hanging around: 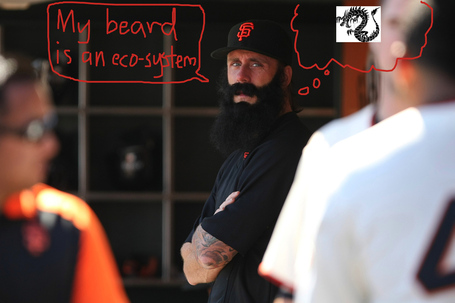 Where I come from, we don't let our vagrants mill around major league dugouts. We require them to get permits. Your way is probably better and more humane though. I'm not saying the beard isn't cool either. I'm just not nearly as impressed as I would be if it were made of bees.

Now I'll turn it over to Uncle Weez:

Once upon a time, there was a sleazy little strip club in Miami Beach called Gigantitties. It was one of those establishments that exudes a faux-classiness to make the shame of the de-Bochy-ry and depravity occurring inside stick to your soul a little less. This lovely joint was the place of employment for several colorful characters. Let's meet them, shall we?

Brandon Belt: Poor Brandon spent so much time going to bartending school, learning all the tricks of the trade. He knows his booze, he knows how to pour, he's just got that inherent talent needed to be a good bartender. Unfortunately, Brandon can never seem to get enough hours of work. His manager is constantly giving the prime shifts to other less-qualified employees. Brandon wants to shine, but he's being held back and it's taking its toll on him.

Aubrey H & Madison B: The sexiest dancers this side of the Mason Dixon (that's another club 3 blocks north run by Billy Beans. They're thinking of moving to the same block, but Gigantitties wants none of that), Aubrey and Madison give it their all on-stage. Aubrey's been around the block a bit, while Madison is just hitting her prime, wowing customers with her curves. Some might say that Aubrey's a bit past her prime, but the manager thinks otherwise. She makes extra money as a bartender when she's not dancing, much to the chagrin of poor Brandon.

Pablo Sandoval: Head chef at Gigantitties, Pablo loves food. He understands food. He has greater aspirations, but makes do with his situation. His specialty is fast-food style Chinese food, but he hates the nickname it got him, "Kung-Fu Panda Express."

Ryan Theriot: The creepy regular with a soul patch who keeps trying to get Aubrey and Madison to come do quaaludes with him in his '94 Geo Metro. Always drops his drink, and there's this one step up in the club where I'd say he trips 67% of the time, falling on his face like a twerp.

Marco Scutaro: A dishwasher, Marco is an aspiring country/dubstep mash-up DJ. He keeps begging the manager to let him spin a day shift, but he's terrible at it, so the manager keeps saying no.

Hunter Pence: "Captain Underpants" as he's affectionately known, is the club's accountant who doubles as a dancer on "Ladies' Night." They keep the lights low when he dances, as he tends to get a little too into it sometimes.

Sergio Romo and Brian Wilson: These guys were line chefs, and pretty good at it, but were recently fired when they refused to wear hair nets over their beards. Also, Brian Wilson's Tourette's Syndrome and Schizophrenia ("Tourettesophrenia") was becoming a distraction to co-workers.

Joaquin Arias: Arias is the IT guy, who keeps pushing the owners to allow free WiFi in Gigantitties to no avail. He's actively seeking an orthodontist, and inexplicably wears a leisure suit to work every day.

Barry Zito: Barry was a hotshot during the tech boom, duping an investor into pumping hundreds of millions of dollars into his company Rent-a-Dog.com, which was subsequently shut down due to health code violations and a regrettable incident involving a Jeff Kent bobblehead and a Labradoodle. He hangs curves around all the time because everyone feels bad kicking him out, so they don't.

Tim Lincecum: "Timmy Two-Shoes" is the crackhead who lives in the alley behind Gigantitties. He's harmless, and everyone loves him, especially when he's tweaking out.

Matt Cain: Matt is the bouncer, and everyone is afraid of him. He's just super intense, and is way too good at being a bouncer.

So San Francisco, why not "treat" yourself to a series of three losses, preferably all in a row?