The Giants and Reds look evenly matched, but the Reds are better in the bullpen and in their defense. Will it be enough to topple the Giants' pitching staff? 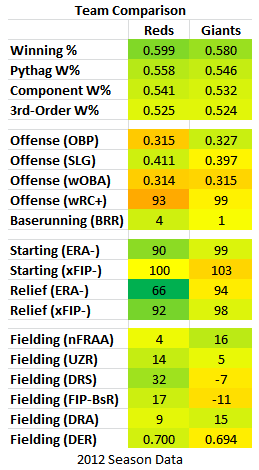 The Reds face off with the Giants in the first of what will hopefully be three playoff series! The Giants are a pretty interesting team. Like the Reds, their actual record looms well above their various winning percentage estimators. Their overall offensive numbers, pre-park adjustments, are similar in magnitude to the Reds', but different in style. Unlike the Reds, the Giants score their runs by getting on base rather than via the big fly. The Reds may be a more athletic team (which also shows in the baserunning numbers), but the Giants profile as a team full of good, solid baseball players. After park adjustments, they look to be the better offense...though with the major caveat that those numbers include the now-suspended Melky Cabrera's performance.

The Giants' calling card, however, has long been their pitching. This year, however, that seemed to take a bit of a hit. In particular, notable former ace Tim Lincecum struggled horrifically in the first half, and posted what was easily the worst season of his career. But Matt Cain and Madison Bumgarner continued to excel, and Ryan Vogelsong was adequate, and Barry Zito beat his peripherals and posted an ok-ish season (for once). The Reds have them beat in terms of overall rotation performance, but they're evenly matched at the top of the rotation. That's really saying something for what the Reds were able to do this year.

Where the Reds see clear advantages, however, are in the bullpen and in fielding. The Reds bullpen turned in an incredible performance this season, and their fielding numbers, which started low, ended up about where most of us expected them to be: not elite, but clearly above-average.

These look to me to be very evenly matched teams. I think the Reds should get a slight advantage: their fielding and bullpen are enough to offset what might be a weaker offense. It's not a big gap, though, and certainly not enough to shift the probabilities of what can happen in a five-game series. It should be fun to watch! 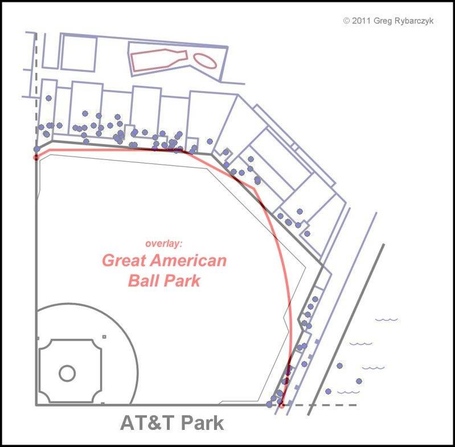 With the exception of right-center field, AT&T Park is not especially large. But it plays as a pretty substantial pitchers' park, probably at least in part due to the fact that it's sitting on the Bay. It has especially strong effects against home runs, in particular against left-handed hitters. That fits with the park dimensions, of course. I think the Reds profile reasonably well at a park like this: they only have two left-handed hitters in the lineup, and one of those (Votto) has tremendous opposite-field power. Therefore, I'd expect this park to have a slightly weaker effect on the Reds than a lot of other teams.

That said, it's also worth noting that the Giants pitching seems to benefit especially well from their park. Matt Cain, in particular, is famous for his ability to survive as a fly ball hitter and yet give up very few home runs. Playing in AT&T park does not hurt matters. 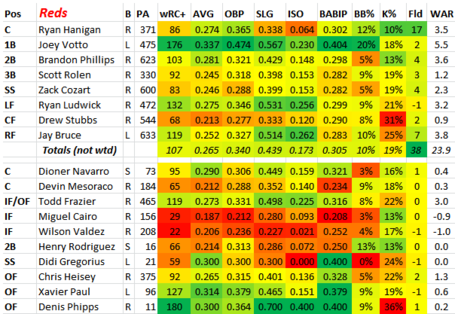 Teams haven't released their postseason rosters as I write this, so I'm just showing everyone who was active as of Wednesday. In future previews, which we'll hopefully have reason to do, I'll hone this down quite a bit.

This team sure looks better with Votto back in the lineup. When Rolen is in the lineup, only three Reds hitters were clearly above-average offensive producers this year: Votto, Bruce, and Ludwick. I do expect that Frazier, despite being a 3-win player this year, will spend at least a majority of games sitting on the bench. It's a nice bat to have on the bench, but it's hard to think the Reds wouldn't be better off with Frazier in the lineup. I do think that Rolen brings something positive in veteran presence and that there is value in having him in the lineup...but I'm not sure what the effect size of that kind of thing is, and whether that and his glove constitutes enough value to give him the nod.

Drew Stubbs is the biggest problem in the lineup, however. With his fielding skills, you can live with a league-average bat and still have a well above-average player. That's basically where we've been over his first three seasons. But my goodness, he has fallen off a cliff over the past month. I know he probably will still get the nod, but it's hard to justify when a capable player like Chris Heisey is sitting on the bench.

Finally, a tribute to Ryan Hanigan's season. He hit exactly as expected this year as he assumed the #1 catcher role this year: good average, low k's, tons of walks, and a nice OBP. He has very little power, but he's a solid hitter. And that, plus fabulous fielding, makes him an extremely valuable player. I have him at 3.5 WAR this year, which ranks 4th among Reds position players, just behind Brandon Phillips and just in front of Ryan Ludwick. That sounds about right to me. I love him. 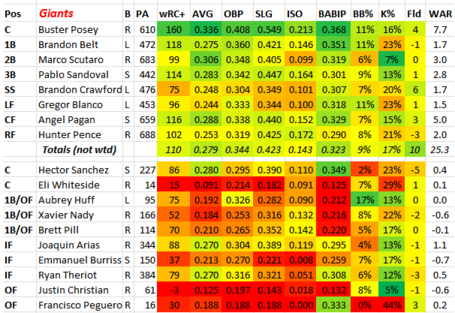 Buster Posey tied for the league lead in fWAR, lead the league in bWAR, and lead the league in WARP. Plus, he's a catcher, and so we're probably still undervaluing his fielding value despite our efforts. He gets my vote for NL MVP. What a comeback season: power, on base, fielding...what more could you ask for? (and yes, if you're wondering, I vote Trout without hesitation for AL MVP, triple-crown be damned)

Beyond Posey, like the Reds, the Giants only have a few other players who posted clearly above-average offensive seasons. Angel Pagan might be the most underrated player in baseball, and he's doing what he does: not outstanding at any one thing, but a very nice all-around game when he's able to stay in the lineup. Pablo Sandoval has been up and down throughout his career (as has his weight), and this season is fairly intermediate between his excellence last year and his sub-par 2010 campaign.

I find Brandon Belt to be interesting simply because of the battle he had to face to finally get playing time. Last year, he seemed an obvious candidate for the first base job but quickly fell out of favor and toiled for much of the season in the minors while waiting for his opportunity. This year, however, thanks in part to injuries to Aubrey Huff, he started more than anyone else at first base...but even then he shared time with other hitters during much of the year. I don't get it--his career L/R split has actually been better against left-handed pitching, so it's not a platoon issue. He does strike out a lot, but not much worse than Hunter Pence or Jay Bruce, and no where near Drew Stubbs' rate.

Speaking of Hunter Pence, yeesh. That is not the kind of line I expect to see from the guy. He still scares me, though.

The elephant in the room, of course, is the departed pseudo-batting champion, Melky Cabrera. I don't have much to say about him that hasn't already been said, so I'll just say that I have far less tolerance for people who fail drug tests in this era than people who did so before baseball had a meaningful drug policy. In his stead, however, Gregor Blanco has gotten the lion's share of time in left field. Gregor is a speed guy, but he gets on base enough that he can actually make use of it. I like him a little bit.

The one guy in this lineup that seems like a pure concession for his fielding is Brandon Crawford. His hitting line this year was dreadful, but his fielding numbers and reputation are that of a top-quality defensive shortstop. 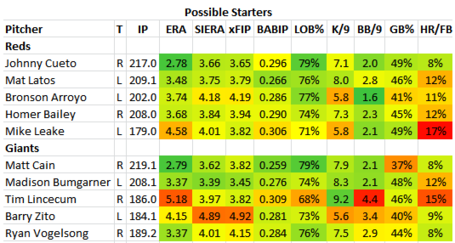 The Giants are reportedly going with Matt Cain today and Madison Bumgarner in game 2. I haven't heard about game 3, but it almost has to be Tim Lincecum. Cain is one of the few clear exceptions to the FIP rules: a guy who gets tons of fly balls, but doesn't allow home runs, and even then outperforms his peripherals almost every year. He'll face off with Cueto, who might be another one of those guys. Their season lines are about as similar as they can get, though Cain gets more K's and Cueto gets more grounders (though that latter number is lower than I remember it being earlier this season). Cain has a longer track record of doing this. I'll believe Cueto in a couple more years, but I'll probably be one of the lastones.

Madison Bumgarner might even scare me more than Cain, however. He's been a little bit inconsistent from start to start of late. But he's been a horse all year long, seeing his strikeout rates steadily climb from an early season lull to almost clear the 200 K mark on the season. He's one of the best left-handed pitchers in the game.

The fall of Tim Lincecum was amazing to watch this year. The guy who had been the best pitcher in baseball had previously shown drops in velocity, but until this year seemed able to be effective even has his fastball declined because of his phenomenal change-up. This year, though, he saw his walk rates increase dramatically, and his ERA soared to catastrophic levels. His other numbers aren't nearly as bad, but it's hard to do well in this game when you walk more than 4 batters per nine. It's not just a first half thing either: after seemingly getting things under control in June, July, and August, he posted 5.66 bb/9 in September.

I doubt we'll see Zito or Vogelsong as starters this year. Zito, I think, survived by classic luck; were it not for his contract, I think he'd be pretty much done by now. Vogelsong continues to surprise me, but managed to post solid numbers in his second season and is unquestionably a solid major league pitcher.

Man, Homer Bailey finished the season strong--and I'm not just talking about the no-hitter. It's great to see him finally come through like this. Mat Latos also turned in the season the Reds were likely hoping for when they acquired him. I'm thrilled with his performance. Bronson may have slipped a bit as the season rolled along, but I'm back to believing in the guy again. 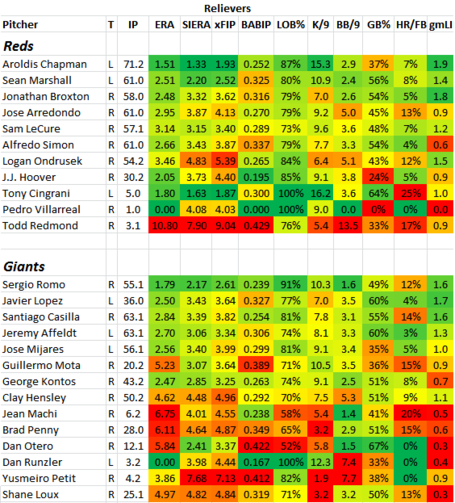 For a team that has had a rather unsettled bullpen, the Giants' top bullpen arms seem to have had remarkably good seasons. After Brian Wilson went under the knife, Santiago Casilla held the closer job for much of the year. But lately, they've apparently been using a "committee" approach involving both Sergio Romo and Javier Lopez, depending on the handedness of the situation. The usage of Romo is such a puzzle to me. His rate stats over the past several years are among the best relievers in baseball. But he almost always throws in more games than innings pitched...at one point a few years ago, I mistook him for a LOOGY! He did end up with 14 saves, however, and given how righty-weighted the Reds' lineup is, I'd expect that he's the likely guy to get the ball in the 9th if the Giants have the lead.

The only other guy I want to feature is Jeremy Affeldt, the former Red who has now been with the Giants for four seasons. He's posted a 2.73 ERA in 237.3 innings in San Francisco. Now 33, he's been a very nice left-hander for them for a while now, and this year was no exception.