The Reds have played the Giants (New York & SF) 2,045 time in franchise history. That's third-most of any other club. This is the first time they've met in the playoffs.

I did a rough-sketch preview of the series last week, including how Reds' hitters match-up against Giant aces Cain and Bumgarner.

This is a closer look.

Ryan Ludwick was third in the NL this season in "no doubt" HRs, according to Hit Tracker. All of his HRs this season would (most likely) have been gone in both AT&T and GABP: 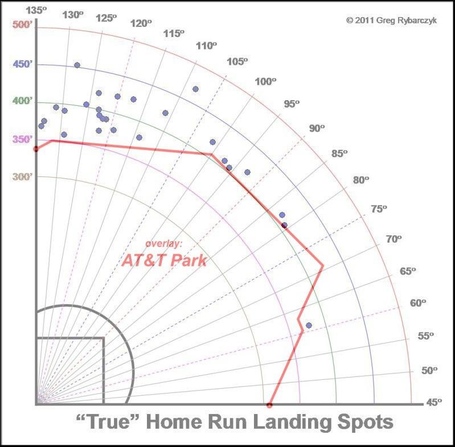 Bruce and Frazier may have a little more trouble by the Bay, especially with the height of the right field wall.

Five best match-ups for both teams

I didn't include Lincecum in the analysis, given how weird his season has been. Although he's not included here, I also came away from this feeling better about Stubbs' chances against Bumgarner.

The Reds' bats struggle the most in righty-righty match-ups. The Giants are a little more left-handed as a staff, with Zito and Bumgarner in their rotation and three lefties (Affeldt, Lopez, Mijares) in their bullpen. This would be good news, except that: (1) Bumgarner, (2) Reds are counting on Jay Bruce to boil over again to make a deep run in the playoffs, but he still has problems with lefties.

On the Giants side, Sandoval, Sanchez and Pagan are switch-hitters. With three pitchers in the Reds' 'pen known for shutting down lefties - and Dusty and Bruce Bochy involved - there are going to be some knife-spoon wars.

Several degrees of a fraction of Jeremy Affeldt

Affeldt was a sturdy reliever for the Reds in 2008. Under the old system of compensation, just about any team with a veteran player who was healthy and didn't like your offer got a comp pick. The Reds had one for Affeldt in 2009, which they used on Brad Boxberger. Boxberger, of course, was one-fourth of the Mat Latos deal. Which allows us to say that Jeremy Affeldt leaving Cincinnati for San Francisco is solely responsible for the Reds being in the playoffs.