This Day in Reds History: Maloney to Minnesota

On this day in Reds history, former Red Eddie Taubensee was born, and Minnesota claimed Matt Maloney off waivers.

Share All sharing options for: This Day in Reds History: Maloney to Minnesota

On this day in 1968, former Red Eddie Taubensee was born in Beeville, TX. Taubensee spent parts of seven seasons in the Queen City as a catcher for the Reds. While predominately a backup, Taubensee was the Reds primary backstop in the 1998 and 1999 seasons. Taubensee slashed .286/.343/.460 (105 OPS+) as a Red while playing below-average defense.

On this day in 1973, lefty reliever Tim Byrdak was born in Oak Lawn, IL. Byrdak is best known to Reds fan for giving up a certain home run. 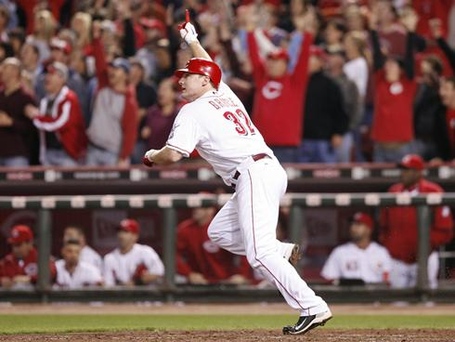 On this day in 1977, the Reds traded Bill Caudill and Woodie Fryman to the Cubs for pitcher Bill Bonham. The right-hander pitched three seasons for the Reds. During that time, he went 22-13 with a 3.73 ERA (99 ERA+) in 335 innings pitched.

Also on this day in 1977, the Blue Jays purchased right-handed reliever Joe Henderson from the Reds.

On this day in 1984, the Reds traded reliever Keefe Cato to the Padres for lefty hurler Darren Burroughs.

On this day in 1991, the Reds signed rightfielder Gerónimo Berroa. Cincinnati released Berroa the following offseason after the rightfielder appeared in only 13 games for the big league club in 1992.

On this day in 2011, the Minnesota Twins selected lefty Matt Maloney off waivers from the Reds. Yossi wept in response. Maloney spent parts of three seasons in Cincinnati, where he compiled a 4-9 record with a 5.40 ERA (77 ERA+) in 80 innings.