Ehh, don't read too much into this one. The Reds, though they gave early cameos to most of their regulars, played get-'em-out-healthy on getaway day.

Homer Bailey, though he wasn't no-hitter good tonight, continued his dominant form, going a Dusty-mandated 4.0 IP, striking out 6, walking none, and allowing only 4 hits and no earned runs. Homer has allowed 2 or fewer runs in 6 of his last 7 starts, 5 of which featuring him yielding 1 run or less. He finished up what many have called his breakout year with a 13-10 record, 3.68 ERA, 1.24 WHIP, and a better than 3 to 1 K/BB ratio in his 208 IP.

For a pitcher that may not even see any action in the playoffs, that's fantastic work. 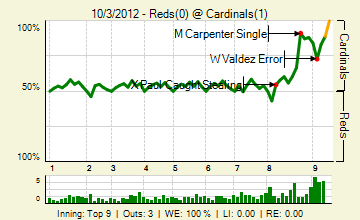