Monday, October 22, 2012 is the thirty-seventh anniversary of perhaps the most famous loss in Reds history – Game Six of the 1975 World Series. If you are a Reds fan, you probably spent this day not thinking too much about it since the Reds won the series in seven games. However, if you were the player who hit the game winning home run in that game for Boston, chances are that you spent this night attempting to reenact selected scenes from "Field of Dreams." Carlton Fisk was found passed-out drunk in an Illinois cornfield by police following reports of his F-150 acting all "shucky-jivey." Fisk apologized for steering his car into the cornfield and blamed the instance on unsuccessful attempts to wave his truck back onto the highway.

It’s rare to find a professional baseball manager or coach that will leave his current employer in order to take a worse job elsewhere. However, that is exactly what David Bell decided to do today. Bell, the second year AAA manager for the Louisville Bats, accepted a job as a third base coach for the AAA Chicago Cubs. The move is a bit of a head scratcher, to say the least, considering many have speculated that David Bell was being groomed for the Reds’ job once Dusty decides to hang up the cleats. Regardless, the Cubs are touting Bell as someone who will "immediately fit in" with the club after he finished 38 games back in International League West in 2012.

Wednesday: A Spoonful Weighs a Hamilton

Sometimes, a "DO NOT WANT" meme simply will not suffice in explaining how stupid an idea truly is. These instances usually involve hypothetical flights of fancy made for the sole purpose of filling column inches. Paul Daugherty’s most recent incarnation of this method examines whether or not the Reds should bring back Josh Hamilton. Of course, Daugherty simply asserts that the Reds would have a pretty cool lineup if they did this. We agree, for about one hundred games until Hamilton inevitably sprains his knee from falling off a wagon (either literally for figuratively). Unfortunately, P-Doc reached his word limit before he could examine whether it would be productive to have someone who is hated by his would-be Cincinnati teammates, who hates the team for firing his baseball/life coach, and who has a 50/50 probability of missing the playoffs due to injury. Thanks to the Doc, though, the wheels are greased for fans to complain about re-signing Ludwick for $9 million when they could get Hamilton for $18 million. (Editor’s note: why should I buy a Corolla for $13,000 when I could get a Jaguar for $40,000?)

Thursday: Comment of the Week (Soon to be renamed "It Was Actually Worth the Loadtime Award") 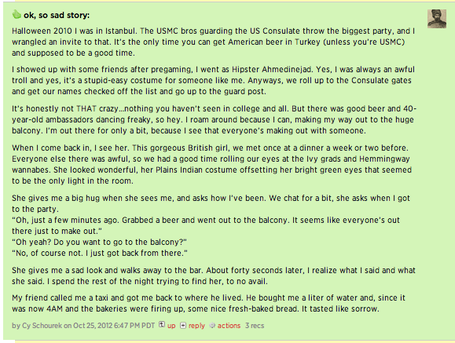 Friday: The Price We Pay for No More Ozzie

When the Marlins fired Ozzie Guillen (unexplainably, weeks after their last game), we here at RIWIAW assumed we’d be hurt the most by losing our favorite managerial-alcoholic-in-residence for Major League Baseball. However, it turns out the real loss may be on the Reds, as news broke today that Bryan Price reportedly interviewed for a position in the Fishtank (ne Drunktank). While we regrettably admit that Price probably deserves a job as manager, we think he deserves one with a club not known for firing great managers after their first year.

We haven’t even started gathering the ingredients needed for our hot stove stew, but already speculation has begun on players the Reds may go after this offseason. Read: The Reds have no money and are talking to no one, redux. The biggest questions will likely involve 2/3 of the Reds outfield. Namely, if the Reds part with Ryan Ludwick and/or hardcore pawn off Drew Stubbs, who would the Reds potentially bring in? The names most frequently tossed around thus far have been Angel Pagan, Michael Bourn, and Shane Victorino. Other names include Juan Pierre, who, frankly, should be labeled the Ryan Theriot of the 2012 offseason. Meanwhile, the 2012 Ryan Theriot should be labeled the 2012 version of “Good lord, Walt, what are you thinking even considering that?”

We normally don’t like linking to Bleacher Report. However, with our site redesign, you probably wouldn’t notice the difference between it and a poorly written FanShot. That notwithstanding, BR have a fairly nice tribute for Scott Rolen. Rolen, who is expected to announce his retirement later this offseason. Rolen has been made somewhat expendable due to the emergence of Todd Frazier and other Reds obtaining veterany-presence with their second postseason trip in three years. With this impending news, the inevitable “Hall of Fame . . . or Very Good” discussion will begin and continue for at least the next five years. While Rolen may not have the requisite counting stats due to him playing the past decade in the body of a 50 year old football player, his on-field performance and defense will provide him with enough mitigating factors to make it a great discussion over three five seven beers.